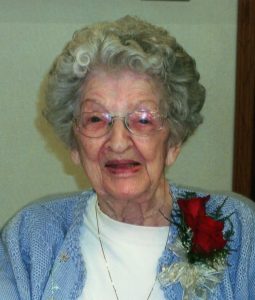 Ruth I. Swartzbaugh, 101, formerly of Bushnell, Pontiac and then Havana, Illinois, died on September 9, 2017 at Roseville Rehab after moving there in July 2015. She was born in Grand Forks, ND, in May 1916 and moved to Good Hope, IL, when she was young. She met Richard Swartzbaugh when she was a member of a softball team and was married in June 1936. She is survived by four daughters, Linda (Gene) McGrew of Bushnell; Sarah (Bob, deceased) Oswalt of Elkhorn, Nebraska; Ruth Anne (Ken) Beaty of Havana; and Jan (John) Boyle of Bourbonnais. Also surviving are 11 grandchildren, Ellen McGrew, Dan McGrew, Natalie McGrew Mahler, Kurt Oswalt, Kevin Oswalt, Shelly Oswalt Gleason, Shawn Beaty, Derek Beaty, Cheris Beaty, Carie Boyle Bellamy and Amanda Boyle Salgado, 22 great-grandchildren and 13 great-great-grandchildren. Preceding her in death were her parents, husband, Dick in January 1996, one sister, Opal Chipman and four brothers, Harold, Gaylord, Keith and Shirley Boote. She was a homemaker until living in Pontiac, where she worked at St. James Hospital in the cafeteria. When in Havana, she worked for Jack O’Bryant, Jack Steele and Ruthie Budyn at Nu-Way Laundry, DuRite Laundry and later White and Brite, until her retirement in 1998. She was a member of Havana First United Methodist Church, United Methodist Women and was a life-time member of Eastern Star. She was a devoted wife, mother, grandmother, great and great-great-grandmother. Funeral services will be held at her church, First UMC in Havana on Friday, September 15, 2017 at 11 a.m. with visitation one hour prior to the services. Burial will follow the services at Laurel Hill Cemetery in Havana. Rev. Jame Hahs will officiate. Memorial contributions may be made to her church or Roseville Rehab and Health Care in Roseville, IL. Online memorial messages may be left for the family at www.hurleyfh.com. Hurley Funeral Home in Havana is in charge of arrangements.