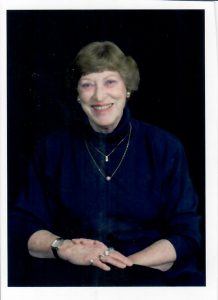 Joy Marlene Zimmerman, 85, of San Jose, passed away September 7, 2017 Abraham Lincoln Memorial Hospital in Lincoln. She was born on June 30, 1932 the daughter of William and Lethia (Holder) Surgeon in Hardin. She married Robert L. Zimmerman on August 14, 1952 in Hardin, (Calhoun County). He preceded her in death on April 27, 2003. Joy is survived by one son, Robert William “Bill” Zimmerman, four grandchildren, Lydia and Sam, Derrick Davis and Mary Piper Reeves. She is also survived by one niece, Marty (Matt) Knight, and a nephew, Lindy Aderton. She was preceded in death by a daughter, Jill Marlene, two sisters, Dixie Miller and Sharon Surgeon. Joy leaves behind numerous friends and former students, many of whom she was still in touch with. Joy graduated from Blackburn University with an Associates Degree and then later received her Bachelors Degree from Illinois State University and did graduate work at Western Illinois University with degrees in Health and Physical Education. She began her teaching career at Hopedale, in 1954 and established their first Physical Education Program. She continued teaching in the San Jose Unit District and later retired from Illini Central School District, following the District’s consolidation. She served as a tutor and substitute teacher in the years following her retirement. Joy was chosen by the North Central Association of Schools as an evaluator for Physical Education Programs at other surrounding schools. Joy was the State of Illinois chosen delegate to the United Nations representing Leadership on Recreational Activities in New York City and the Committee for Lifetime Sports for the Aging, Washington D.C. Joy was an active member of the Illinois Association for Health, Physical Education and Recreation, serving as Vice President of Secondary Schools, was a member of the Executive Board, was Western District President, and Chairman of the State Conventions and Committees thereafter. She served in legislative areas as Task Forces and Ad-Hoc Committees under three State Supt. of Schools and the A-160 project with Dr. Bakalis. She was a member of the Lifetime Sports Foundation, giving seminars as a speaker, and a UNESCO delegate for Physical Achievement, county and district board member of American Red Cross, charter member of the Peoria Journal Star Women’s Advisory Board, and was an elected official of Village Board in San Jose for 26 years until resigning for health reasons as Village Clerk. Joy served on Abraham Lincoln Hospital Board and committees for 25 years. She was a member of the Order of Eastern Star and County and Girls Scout Council and Camp Coordinator. Joy considered one of her best accomplishments of service was participation on Task Forces, Legislative Committees during the implementing and passage of the Title IX (Title 9) which was when girls sports became recognized after working so many years for equality for the girls’ teams. Joy was a member of the San Jose United Methodist Church. She was a Sunday School Teacher for the High School Students. She and her husband, Bob, served as Youth Leaders. A funeral service will be held for Joy on Tuesday, September 12, 2017 at 6:30 p.m. at the San Jose United Methodist Church. Visitation will be held from 5 p.m. to 6:30 p.m. also at the church. Matt Simer will officiate. Cremation rites will be accorded after the service. Burial will take place at a later date. Memorial contributions may be made to San Jose United Methodist Church or Abraham Lincoln Memorial Hospital. Online condolences may be left for the family at www.hurleyfh.com Hurley Funeral Home in Mason City, IL is assisting the family with arrangements.