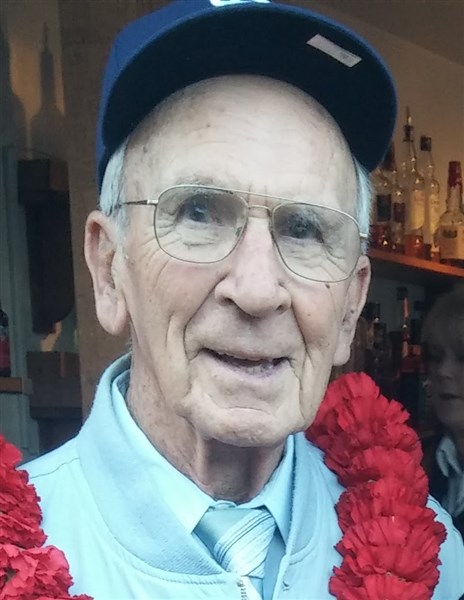 Robert Eugene Jackson passed away on 19 July 2016 in Huntington Beach, California at the age of 91. He was born 1 January 1925 in Canton to Jesse O and Eva M Standard Jackson. Upon graduating from Pekin High School in 1943, he enlisted in the U.S. Army and served as a Combat MP in France during WWII. In 1950 he enlisted in the U.S. Air Force and served in the Military Air Transport Service during the Korean War. He graduated from the University of Illinois in 1956 with a B.S. in Bus. Admin., and his MBA from California State University in 1969.
On 3 August 1958 he married Norma T Keller Peruch in National City, California and they made their home in the San Diego suburb of Claremont, and later in Huntington Beach. Bob worked for Convair and McDonnell Douglas on various space programs through the 1960s and 1970s, retiring in 1988. Bob greatly enjoyed the outdoors, backpacking in the Sierras and waterskiing at Lake Havasu. He was actively involved in the YMCA Indian Guides and served as an Assistant Scout Master and Little League umpire. He loved Big Band music and was an accomplished ballroom and swing dancer. He also enjoyed restoring his beloved 1971 Continental Mk III. After his marriage to Norma ended, he reunited with his high school sweetheart Mary ‘Toadie’ Buchanan Hendryx of Peoria. Bob continued to spend his winters in San Diego and his summers in Bath, Illinois where his heart was very much at home.
Bob was preceded in death by his parents; his wife Norma; his brothers Rolland ‘Mike’ Jackson and Jerry Jackson; and his longtime partner Mary Hendryx. He is survived by his children Sandy (Ray) Wilson of Salem, Oregon; Todd (Susan) Jackson of Huntington Beach, California; and Brian (Carolyn) Jackson of Annapolis, Maryland; granddaughters Jamie (Patrick) Anderson of La Quinta, California and Dena Guralnick of Beaverton, Oregon; great-grandchildren Ryan and Aubrey Anderson; sister Wanita Bumbalough of East Peoria, Illinois; brother Ted Jackson of Havana, Illinois; and numerous nieces and nephews.
A celebration of life will take place at a later date in Illinois.