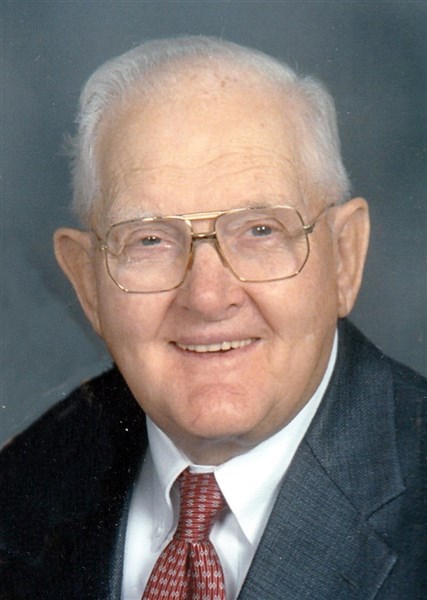 Lawrence Milton Whiteford, 93, of Pekin, passed away at 1:35 p.m. Wednesday, February 3, 2016 at Apostolic Christian Restmor in Morton.  He was formerly of Manito.
Born July 25, 1922 in Manito to Milton and Stella (Meeker) Whiteford, he married Marguerite Wilma Ekdahl on October 20, 1946 in Plainfield.  She survives.
Also surviving are four daughters, Dianna (Jerry) Jenkins of Colorado Springs, CO, Miriam (Donald) Jordan of Eureka, Sarah (David) VanOrman of Pekin, and Marcia (Darold) Hogue of Groveland; twelve grandchildren; three step-grandchildren; twenty-two great-grandchildren; six step-great-grandchildren; and one sister, Viola Allen of Marietta, OH.
He was preceded in death by his parents; one step-granddaughter; and one sister, Lucille Schierbeck.
He was a 1940 graduate of Manito High School.
Lawrence was a longtime farmer in Manito Township, retiring in 1988.  He had served as a Director for Farmers Grain and Coal in Green Valley for 13 years and Director for the Central Illinois Irrigated Growers for 9 years.
He was a member of Cornerstone Baptist Church in Groveland.  He was a former member of First Baptist Church in Pekin and Spring Lake Missionary Church in rural Manito, where he had served as a Deacon and Sunday School Superintendent.  He had served on the Governing Board at Fort Wayne Bible College in Fort Wayne, IN.  Lawrence was devoted to his Lord.
Lawrence enjoyed bowling and playing softball in his earlier years.
His funeral will be at 10:30 a.m. Tuesday, February 9, 2016 at Cornerstone Baptist Church, 18040 Unsicker Road in Groveland.  The Rev. Dr. Steven Hauter will officiate.  Visitation will be from 4 to 6 p.m. Monday at Preston-Hanley Funeral Homes & Crematory in Pekin.  Burial will be at 2 p.m. Tuesday at Green Valley Cemetery, with the Rev. Steven Rowell, Sr. officiating.
In lieu of flowers, memorial contributions may be made to Cornerstone Baptist Church, Post Office Box 924, Morton, IL 61550  or to the Peoria Rescue Mission, Post Office Box 837, Peoria, IL 61652.
To express condolences online, visit www.preston-hanley.com