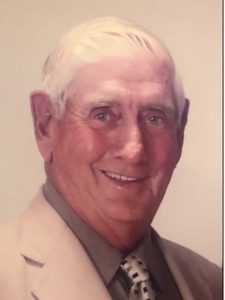 Raymon Meyer, 88 of Avon, IL passed away, Thursday, March 12, 4:40 p.m. at the OSF Richard L. Owens Hospice Home. He was born Monday, September 14, 1931 in Maquan, the son of Edde and Florence (Tasker) Meyer. He married Delores Hiton on October 11, 1950 and she preceded him in death on June 15, 1981. He later married Janet Shroyer on August 5, 1983. Raymon is survived by his wife Janet of Avon; children, James (Janice) Meyer, Joe Meyer, Karen (Ron) Earp, Sharon (Robert) Dodd, Connie (Todd) Thomas, Debbie Kruzan, Todd Shroyer; 18 grandchildren, 23 great grandchildren; and one brother, Marvin Meyer. He was preceded in death by his parents, 1 daughter (Katherine Dunn), 1 sister (Eleanor), 1 brother (Rolland), 2 granddaughters (Amy and Angela). Raymon graduated Valley High School, where he played basketball and their team went to state. He farmed in the Avon community area for many years and enjoyed tending his cattle and hogs. He was a member of the Farm Bureau. He enjoyed having the grandchildren on the farm where they would all wait for their turn for a tractor ride. Funeral service will be Thursday, March 19, 11 a.m. at the Wise Family Funeral Home, Avon.The family of Raymon Meyer after much discussion and concern has decided not to have visitation Wednesday night.  Friends may call at the Wise Family Funeral home starting at 9:00 am until 7:00 pm on Wednesday. They have also decided to have a private family funeral.  They hope people understand that safety for everyone is their main concern.  They do plan to have a celebration of Raymon’s life with friends and family at a later date.  They also appreciate the love and support that has been shown to them during this time.  Any questions please contact Wise Family Funeral Home in Avon 309-465-3770. Memorials may be made to the University of Iowa Medical Center and or the Richard L. Owens Hospice House. Please sign the online guestbook at www.wisefamilyfuneralhome.com. Wise Family Funeral Home Avon is in charge of the arrangements.