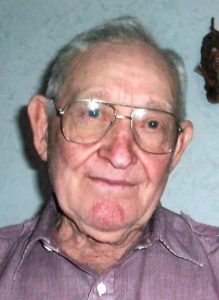 Ralph L. Shank, 96, passed away at 8:04 p.m. on Wednesday, March 14, 2018 at Graham Hospital. He was born on March 22, 1921 in Table Grove to Jerry Jacob and Mariah E. (Weigel) Shank. He married Wilma Nebergall on January 16, 1947 in Palmyra, MO, she preceded him in death on February 21, 2015. Ralph was also preceded in death by his parents, two brothers, Gilton and Lyle Shank, and two sisters, Rosalie Foster and Marie Robinson. Surviving are two children, Albert L. (Mary Jo) Shank of Cuba and Helen (Danny) Dare of Canton; three grandchildren, Jeremy (Debbie) and Derek (Elizabeth) Dare, and Keith (Rebecca) Shank; four great-grandchildren, Jacob, Rylee, Kennedy, and Lincoln Dare; one brother, Daniel Shank of Canton, and two sisters, Anna Henderson of Lewistown and Florine Bucy of Globe, AZ. Ralph worked as a forklift driver for Navistar for 30 years. He was a member of Lewistown VFW and the Canton Flying Club. Ralph served in the Army Air Corp from 1942 to 1945 as a Corporal in the 88th Transport Squadron during World War II. Services will be held at 11 a.m. on Monday, March 19, 2018 at Sedgwick Funeral Homes & Crematory in Canton where a visitation will be held from 10:30 -11 a.m. Darla Henderson will officiate. Burial with military honors will follow the services at White Chapel Memory Gardens in Canton. Memorials can be made to Wounded Warrior Project or Lewistown VFW. To make online condolences you may go to www.sedgwickfuneralhomes.com