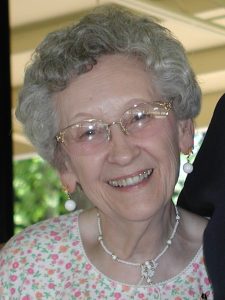 Evelyn “Irene” Knepp, 94, of Peoria passed away at 8:45 p.m. Friday, January 26, 2018 at Unity Point Methodist Hospital. She was born May 18, 1923 In Lewistown, the daughter of Jesse and Rose Hagan Lindsey. She first married Howard Small on July 8, 1944. She later married George Shales May 5, 1966. He died February 2, 1977. She later married Gordon St. John May 27, 1978. He died February 22, 1987. She then married Thelburn Knepp September 5, 1992. He preceded her in death on November 24, 2016. Evelyn is survived by one son, Ronald L. (Karen) Small of Wheaton; one daughter, Marsha Eileen (Michael) McGarry of Fayetteville, AR; one step-daughter, Sally (Gene) Burmeister of Franklin, WI; two step-sons, David (Nila) St. John of Elgin and T. Duane (Kathy) Knepp of Rutland; twelve step-grandchildren and six step-great-grandchildren. She was also preceded in death by her parents, three sisters and four brothers. Evelyn was a Data Entry Operator for Safety-Kleen Corp of Elgin before retiring in June of 1988. She was a member of Faith Missionary Church in Bartonville and its Women of Faith. She was also a former member of First Presbyterian Church in Pottstown where she taught Sunday School. Funeral services will be at 11 am Thursday, February 1 at Faith Missionary Church, Bartonville. Visitation will be Thursday, February 1 from 9:30 to 11 a.m. also at the church. Rev Craig Hislope will officiate. Burial will be at Oak Hill Cemetery in Lewistown. Memorials may be made to Faith Missionary Church in Bartonville. To view Evelyn’s memorial page or to leave an online condolence please go to www.davison-fulton-bartonvillechapel.com.