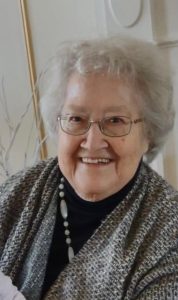 Zoe Rene Worner, 85, of Forest City, passed away at Mason District Hospital, in Havana, at 5:06 p.m., on Sunday, November 27. She was born March 14, 1937, in Chariton, Iowa, to William and Elizabeth (Bower) King. She married Robert Nelson Worner, in Washington, on August 10, 1958. He preceded her in death on October 18, 2013. Mrs. Worner is survived by three children: Chuck (Sandy) Worner, of Midland, Michigan, Elaine (Mark) Ray, of Chapel Hill, NC and Michael (Heather) Worner, of Forest City; seven grandchildren: Nelson (Bryna) Worner, Mitchell Worner, Alex (Matthew) Gray, Cory Ray and Sam (Natasha) Ray, Scott (Arianna) Worner, Kaytlyn (Stacy) Worner; three great-grandchildren: Ella, Layne and Ryen; as well as siblings, Nancy Pope of Washington and Alan King of Ohio. She was preceded in death by her parents, husband, daughter: Barbara Worner, and brother-in-law, Gene Pope. Mrs. Worner graduated from Washington High School. She then attended the University of Illinois, where she met her husband, Robert, and received a degree in Music, with Bronze Tablet Honors. She lived in San Jose until moving to Forest City in 1969. She was a music teacher at Green Valley, Forman and Midwest Central Schools. She also taught private piano lessons and played the organ and piano at Forest City Community Church. Mrs. Worner was active in DAR, and Forest City Community Church, where she had helped to establish the bell choir. She was an avid supporter of Forman Valley Library. She was a member of the Illinois Retired Teachers Association and a supporter of local fire departments. She loved Illini sports, St. Louis Cardinals, cats, music and football. Most importantly of all, she loved her family. Funeral services will be held at Forest City Community Church, on Saturday, December 3 at Noon. Visitation will be held from 10:00 a.m., until Noon, immediately prior to the services. Cremation rites will be accorded. Burial will be at Forest City Cemetery at a later date. The women’s group will serve a luncheon after the services.In lieu of flowers, the family requests that memorial contributions be made to Forest City Community Church or Forman Fire Department. Online memorial messages may be left for the family at www.hurleyfh.com. Maas-Hurley Funeral Home in Manito is in charge of arrangements.