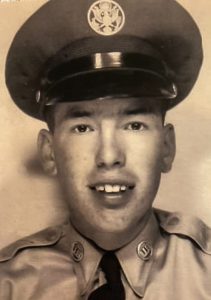 Dwight E. Eddington Sr., 84, Swansea passed away on April 24 at Memorial Hospital in Belleville. He was born on January 14, 1938 in Macomb, the son of Clarence and Clara (Bozard) Eddington. Dwight married Linda Workman in June of 1954 in Beardstown. Linda preceded Dwight in death. Also preceding Dwight in death are his parents and daughter, Carol Stoops. He is survived by his 3 sons, Max (and Margie) Stoops of Sandia Park, NM, Charles Stoops of Littleton, and Dwight (and Sandy) Eddington of Cuba, 1 daughter, Jerri (and David) Tippey of Belleville, and several grandchildren and great-grandchildren. Dwight was a veteran and served in the US Air Force from 1957 to 1964 as a corpsman and firefighter. Dwight also worked at International Harvester in Canton and then for the State of Illinois in conservation. Dwight was an avid outdoorsman who could be found running the foothills of Fulton County with his faithful companion who will be buried with him. Dwight loved trapping, hunting and digging roots. Most of his time was spent shooting his guns on his range. Dwight also enjoyed genealogy and photography. Dwight was lifetime member of the NRA and American Legion. Cremation rites have been accorded. A visitation will be held from 9 to 11 a.m. on November 19 at Shawgo Memorial Home in Astoria. Memorials may be made to the Astoria American Legion Post #25.