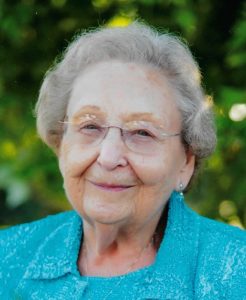 Donna M. Farr, 86, of Table Grove died on October 11 at Graham Hospital in Canton. She was born on April 9, 1936 near Vermont the third daughter of Leonard and Ailene (Aten) Brockley. She started her education at Kost School near Vermont and graduated from VIT High School in Table Grove. Donna married Jack G. Farr on June 27, 1954 in Vermont. They lived in or near Table Grove their entire married life until his passing on August 3, 2012. Donna was also preceded in death by her granddaughter-in-law, Jenny Farr on September 6, 2020, as well as her two sisters, Doris Kost and Virginia McCormick. She is survived by two sons; Randy (and Sue) Farr of Ipava, and Tony (and Michael Fricke) Farr of Mission Viejo, California, two grandsons; Jason Farr and Jared (and Breann) Farr, both of Table Grove, three great-grandchildren; Taylor Martin, Colby Martin and Ella Farr, Donna’s twin brother, David Brockley of Vermont and many nieces, nephews and a host of friends. Donna and Jack farmed near Table Grove and she also worked as a bookkeeper at VIT School District for 40 years. She loved life and enjoyed spending time with her family and friends. She was an avid card player, rarely missing her Monday afternoon Bridge Club. Donna was a member of the Vermont Christian Church. Cremation rites have been accorded. A Celebration of Life Service will be held at a later date. Shawgo memorial Home has been entrusted with arrangements.