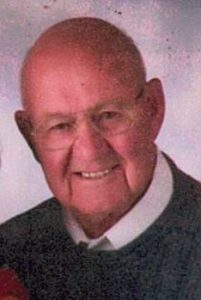 Donald D. “Abe” Trent passed away on Oct. 16 surrounded by his loving family. He was born on Dec. 18, 1935 in Havana the son of Wesley and Mary L. (Weiburg) Trent. Donald attended and graduated from Havana Community High School in Havana. He was a veteran of the U.S. Army 101th Airborne Division, serving his last two years in Germany. Donald was honorably discharged on Dec. 24, 1956. While serving in the Army, one of his favorite songs was “I’ll be home for Christmas”, as he always wanted to be home for Christmas and be surrounded by his family. He installed in his children and grandchildren wisdom, faith, and “family comes first!”. In July 1957 he entered the 18th class of the Illinois State Police. His first assignment was in the Springfield district and then in July 1958 he transferred to the new District 15 in Oak Brook, otherwise known as the Tollway District. He served in many assignments with his last at Zone #1 (East-West Tollway) and retired as a Master Sergeant on Dec. 31, 1985. Donald received an associate degree in Law Enforcement at Sauk Valley Community College in Dixon and attended special courses at the Northwestern Traffic Institute at the University of Illinois, Southwestern University of Texas, and Bradley University. He was a member of St. Anne Catholic Church in Dixon, a Past Grand Knight of Council #690, a Past Faithful Navigator of Fr. Boland Assembly of the 4th Degree, a Past President of Rockford Diocesan Chapter, and State Warden for the Illinois State Council Knights of Columbus. Donald was a Master of the 4th Degree for Northern Illinois and served on the Lee County Board for 16 years and two years on the Zoning Committee. He served as the chairman of the Dixon Knights of Columbus blood drives for over 10 years. Donald was a dedicated blood donor and donated more than 79 units of blood. Donald married Rita Mirabella on Jan. 30, 1960 in Elmhurst and they just celebrated their 62nd wedding anniversary. He will be lovingly missed by his wife Rita, three daughters Andrea (Michael) Traff of Machesney Park, Gayle (Mark) Oliphant of Loves Park, Janet Jarvis of Dixon, and one son Wesley (Kelley) Trent of Chandler, AZ, ten grandchildren Danielle (Nick) Merlino, Blaine (Molly) Oliphant, Gina Toms, Ryan (Mel) Toms, Anthony Ethridge, Sean Jarvis, Christian Traff, Benjamin Jarvis, Ty Trent, and Trey Trent, along with eight great grandchildren Elizabeth Vance, Gianna Vance, Jackson Vance, Lilly Oliphant, Ivy Oliphant, Cheyenne Jarvis, Laikyn Jarvis, and Ainsley Toms. Donald is also survived by his sisters Sandra Birchfield of Havana, Mary (Patrick) Windsor of Elmhurst, and many nieces and nephews. Donald had a wonderful relationship with his poker buddies who he shared a special bond with. He is preceded in death by his parents, sisters Nancy Trent, Mary Ellen Rennecker, brothers Frank Trent, and Louis Trent. The family would like to express a special Thank You to Serenity Hospice and Home who helped the family take care of him, especially to Kelly and Cori. Visitation will be on Friday Oct. 21 from 4:00 p.m. to 8:00 p.m. at St. Anne Catholic Church in Dixon with the rosary to be recited at 7:30 p.m. Mass of Christian Burial will be on Saturday Oct. 22 at 10:00 a.m. at St. Anne Catholic Church in Dixon. The family requests that there be no flowers or plants purchased but donations can be made in Donald’s memory to the Dixon Knights of Columbus Parochial Education Trust fund or Serenity Hospice and Home. Arrangements by the Jones Funeral Home in Dixon. Condolences can be left at www.thejonesfh.com