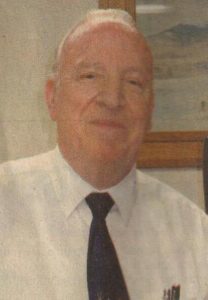 Dr. Harry E. Burch DC, 88, of Lewistown passed away at 1:00 a.m. Tuesday October 11 at OSF St. Francis Hospital in Peoria. He was born November 6, 1933 at St. Louis, MO; the son of Thomas and Esther (Thomas) Burch. He married Clara L. Norris on October 12, 1957 at St. Luke’s Catholic Church in Virginia and they were married 64 years. Clara died November 2, 2021. He was also preceded in death by his parents, one son, Dr. James Burch, and one daughter, Janet Burch. Surviving are three children, Thomas (Kathy) Burch of St. David, Don Burch of Evansville, IN; and Juanita (Lyndelle) Dennis of Camp Point, four grandchildren, Jason Dennis of Quincy, Lyndell Dennis III of Camp Point, Tiffany Dennis of Quincy and Nicole Burch of Lewistown, three step grandchildren, Jennifer Shissler of Canton, Ian Pollitt of Canton, and Brynn Shissler of Canton. Harry graduated from Palmer School of Chiropractic in 1959. He owned Burch Chiropractic of Lewistown from 1959 until 2014. He was a member of St. Mary’s Catholic Church in Lewistown where he served on the board for many years. Harry had been a member of the Lewistown Optimist Club, and he was a 4th degree Knights of Columbus. A funeral mass will be held at 2:00 p.m. Friday October 14th at St. Mary’s Catholic Church in Lewistown with Father David Whiteside officiating. Burial will be private at St. Mary’s Cemetery in Lewistown. Visitation will be held from 11 a.m. until 1 p.m.m with a rosary devotion at 12:30 p.m. Friday at the Henry-Lange Memorial Home in Lewistown. In lieu of flowers memorial contributions may be made to St. Mary’s Catholic of Lewistown. Contributions made by mail should be mailed to St. Patrick’s Catholic Church 545 S. Orange St. Havana, IL 62644. To send online condolences or to view Harry’s life tribute video visit henrylange.com.