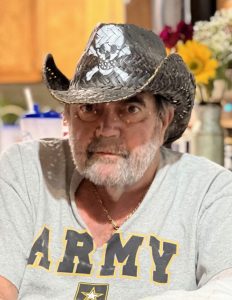 Allen “Al” D. Shore, 70 of Havana passed away Thursday, October 6. He was born October 28, 1951 in Pekin, the son of Philip and Juanita Reaktenwalt Shore. He married Debbie Jo Ryg on June 18, 1994 at the Divernon Sportsmans Club and she preceded him in death on March 12, 2022. Also, preceded in death by a sister, Diane Daniels. Al served in the U.S. Army. He worked as a service manager for Giuffre Buick for over 40 years. He was a member of the Divernon Sportsmans Club and Divernon American Legion. He attended Divernon United Methodist Church. After moving from Divernon to Sun City, AZ in 2018, Al and Debbie attended First United Methodist Church. Al was an avid fisherman. He was a doting father, husband and grandfather who loved spending time with family. He enjoyed outdoor activities and gardening. Surviving are two sons, David (Sheila) Shore of Athens and Michael Shore of Springfield; two step-sons, Troy (Wendy) Christopherson of Geneseo and Nathan (Terri) Christopherson of Moline; grandchildren, Nik, Kyle, Kassi and Mason Shore and Joei Christopherson; one sister, Anita (Tom) Griffith of Havana. Visitation will be from 11:30 a.m. till time of memorial service for both Al and Debbie at 1 pm, Saturday, October 15 at Bramley Funeral Home in Divernon. Burial will follow in Brush Creek Cemetery in Divernon. Memorials may be made to Divernon America Legion, Divernon Sportsmans Club or Divernon Methodist Church. Bramley Funeral Home, Divernon is in charge of arrangements. Condolences may be left online at www.bramleyfh.com