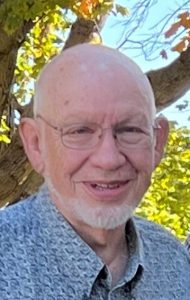 With eyes fixedon his Savior Jesus Christ, Reverend, aged 79, of Smithfield our husband, father, Poppy, and friend, reached up his hand to take hold of the hand of Jesus who led him from this life into everlasting life at 8:48 p.m., on Tuesday, October 4 at Graham Hospital in Canton. He was born on July 16, 1943, in Macomb to Rev. Chester Harvey and Daisy Maxine (Strode) Wright. He married his sweetheart, Marilyn Jane “Janie” Fidler, on June 8, 1963, at Smithfield Church of the Nazarene. She survives, along with their daughters, Denise Carolyn Vroman of Smithfield and Deanna Kay (Brian) Johnson of Elgin. Larry was Poppy to his grandchildren, John Mark (Jayna) Vroman of Pontiac; Erin Jane (Kay) Vroman of Peoria; Heather Michelle Johnson of Loami; Kevin Chester (Abigail) Vroman of Kankakee; Michael Lawrence Johnson and Jeffrey Kenneth Johnson of Ft. Myers, Florida, and to his great grandchildren, Josiah Lawrence, Gideon David, Selah Mae, and Lydia Nannette Vroman. He is also survived by one brother Gerald Eugene (Joyce) Wright of Virginia Beach, Virginia. He was preceded in death by his parents, one brother, David Chester Wright, and an infant son, Kevin Ray. His love for his family was exceeded only by his love for the Lord. Larry dedicated his life to Christian service as a minister in the Church of the Nazarene for over fifty years, pastoring churches in Illinois, Minnesota, New Mexico, and Indiana. He retired from vocational ministry in 2018, but faithfully served the Lord until he was called home. Though retired, Larry continued serving the Lord by filling the pulpit wherever and whenever asked, including preaching his final sermon just a week and a half ago. He also enjoyed greeting the public for the last fourteen years at Henry Lange Funeral Home. In his spare time, he was always busy working outside, where his many hobbies included chopping wood, fixing things, especially small engines, and cheerfully lending his skills to anyone whom he could help. For sixty-seven years, some of Larry’s favorite memories were made in Canada with members of the six generations of his family who were able to vacation there with him. Rev. Larry Wright’s memorial service will be held at Smithfield Church of the Nazarene in Smithfield on Monday, October 10 at 2:00 p.m. Visitation will be from 12:30 p.m. until the service begins. A private graveside service will be held at a later date. Memorials may be given in his name to the Smithfield Church of the Nazarene NYI to help the church’s teens attend next summer’s Nazarene Youth Conference in Tampa Bay, Florida. Arrangements are being handled by Henry Lange Funeral Home in Lewistown.