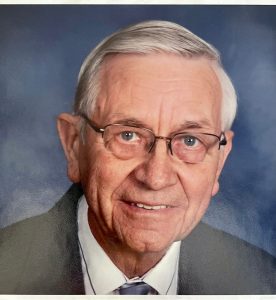 Lloyd Herman Behrends, 87, of Havana, passed away at 12:07 p.m., on Saturday, September 3, at St. John’s Hospital, in Springfield. He was born December 24, 1934, in Quiver Township, on the family farm, near Havana, to Franklin and Bertha (Deverman) Behrends. He attended Ebenezer Country School and then later Havana High School; graduating in 1952. On October 26, 1956, he married Phyllis Malone at the First Baptist Church in Havana. From that union of almost sixty years, they had five children: Tami (Rick) Davidage of Havana, Tony Behrends of Springfield, Tara Behrends of Canton, Teresa Link of Havana, and Todd (Jamie) Behrends of Virginia. Also surviving are eight grandchildren: Leslie (Ken Espejo) Rivillo, James Walker, Jay (Kristy) Behrends, Adria Behrends, Morgan (Kris) Woll, Annie Link, Allison (Tyler) McGrew, and Nia Sanguedolce; as well as one great-grandson, Titus Espejo. Also surviving are two nieces: Carol (John) Breedlove, of Manito and Sally (Terry) Miller, of Morton. He was preceded in death by his parents, one sister, Beulah Lyons, one brother, Paul Behrends, wife, Phyllis Behrends, and one niece, Christi Lynn. In 1955, he enlisted in the National Guard and was called to active duty in 1961-62. He was also a Quiver Township Trustee for twelve years, a member of Mason County Farm Bureau and American Legion Post #138, Havana. Lloyd lived and farmed his entire life in Havana. He enjoyed restoring his International Harvester Tractor and riding it in local parades. While in 4-H, he was the first Mason County tractor rodeo winner, and came in fourth in the State of Illinois. He did this several years in a row. He retired from farming in 2002. Lloyd enjoyed family gatherings, watching Chicago Cubs baseball, going out to eat, and socializing. His favorite food was pizza and anything chocolate. He was a life time member of St. Paul’s Lutheran Church, in Havana, having been baptized and confirmed at St. Paul’s. He served as Sunday School Superintendent for two years and as a Trustee for four years. Funeral services will be held at St. Paul’s Lutheran Church, in Havana, at 11:00 a.m., on Tuesday, September 6 with visitation one hour prior to the services. Burial will follow the services at Laurel Hill Cemetery. Rev. Ian Heinz will officiate. Military rites will be provided by American Legion Post #138 and VFW Post #6408, Havana. Memorial contributions may be made to Mason County Arts Council or University of Illinois – Mason County 4-H. Hurley Funeral Home in Havana is in charge of arrangements.