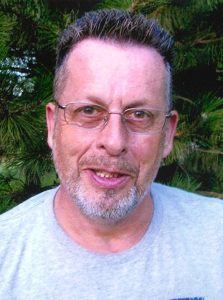 Bob Allen Schade, 70, of Canton, passed away Monday, July 25 at The Loft Nursing Home. He was born May 25, 1952, in Avon to Carl and Vivian (Martin) Schade. He married Donna Tracey on July 31, 1970. She survives. He is survived by his three children, Amber (Jeff) Olson of Omaha, NE, Brent Schade of Jacksonville, FL, and Heather (Adam) Royster of Duncombe, IA; six grandchildren, Brent Schade Jr, Cale Schade, Sydney Olson, Eliza Olson, Luke Royster, and Garrett Royster; mother-in-law, Betty Tracey; two brothers, Charlie Schade and Dennis Schade; and three sisters, Carla Jones, Dianne Swift, and Barb Schade. Bob enlisted in the Army National Guard upon graduating from high school. He served 18 years and was later a member of the Illinois SWAT team. He was also employed at Caterpillar and retired after 30 years. He was a member of the United Auto Workers #974 for all of his years at Caterpillar. After retirement, Bob worked as a bus driver for the Canton School district for 17 years. Bob was a dedicated to working his whole life and he liked to keep himself busy constantly. He loved his children and grandchildren immensely. Bob was a lifelong Chicago Cubs fan. In his younger years, Bob was wonderful little league coach to many. He also enjoyed camping, fishing, and traveling with the love of his life, Donna and his grandkids. He was an avid fan of his grandchildren watching them compete in music events and sports. A memorial visitation and service will be held on Thursday July 27 from 5:00 p.m. -7:00 p.m. at Sedgwick Funeral Homes & Crematory in Canton, with Military Honors occurring before the service at 4:30 p.m. Brother-in-law John Jones will officiate. Honorary Pallbearers will be; Adam Royster, Luke Royster, Garrett Royster, Jeff Olson, Nathan Teel, Micah Barnhart, and Cale Barnhart. Cremation rites will be accorded with Sedgwick Funeral Homes & Crematory in Canton. Memorials may be made to St. Jude Children’s Research Hospital. To view Bob’s DVD or to make online condolences you may go to www.sedgwickfunerhomes.com