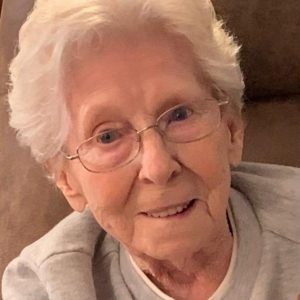 Barbara J. Brown, 92, of Havana, passed away at Mason District Hospital, in Havana, at 2:22 a.m., on Friday, July 22. She was born at her family home, in Havana, on June 29, 1930, to Charles and Lorraine (Bohm) Welker. She married Robert J. Brown on November 5, 1949. He preceded her in death on August 23, 1982. Mrs. Brown is survived by one daughter, Linda (Mike) Hine, of Havana; daughter-in-law, Annette Brown, of Havana; four grandchildren: Deanna (Eric) Murphy, Chad (Summer) Brown, Carrie (Scott) Hackman, all of Havana, and Aimee (Nate) Turner, of Kilbourne; eight great-grandchildren: Brooke, Tori, Trey, Tyson, Tayler, Chloe, Andee and Jack; as well as four great-great-grandchildren: Hensley, Jerrick, Riggins and Kase. She was preceded in death by her parents, husband, and one son, Robert C. Brown, as well as longtime companion, Don Bainter. Mrs. Brown retired from the Mason County Courthouse, where she had worked in the Treasurer’s Office for many years. Her greatest joy came from spending time with her great-grandchildren and great-great-grandchildren. Graveside services will be held at Laurel Hill Cemetery, in Havana, on Monday, July 25 at 2:00 p.m. Rev. Abraham Mogerman will officiate. Memorial contribution may be made to St. Jude’s Children’s Research Hospital. Online memorial messages may be left for the family at www.hurleyfh.com. Hurley Funeral Home in Havana is in charge of arrangements.