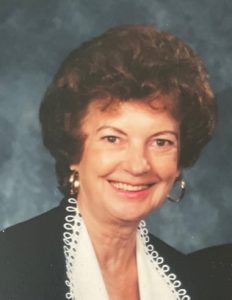 Nancy Brownfield, 90, formerly of Mason City and Havana, peacefully passed away surrounded by her loving family on Saturday, July 16. She was born January 29, 1932, in Lovington, to the late Floyd and Pansy Bandy. Nancy was first married to Ed “Bud” Brooks with whom she shared a daughter, and four sons. She married Wilbur Brownfield on March 13, 1975, in Mason City. He passed away on November 13, 2007. Nancy was a graduate of Decatur High School and later in life she became the Deputy Circuit Clerk of Mason County until her retirement. Nancy was a loving and devoted wife, mother and grandmother. She was known for her beautiful smile and laugh and was excellent at bowling and golfing, winning many trophies in both. She loved gardening, fishing, playing bridge, feeding and watching the birds, and was an amazing cook. She will be dearly missed by her family. Nancy is survived by her daughter, Valerie Brooks, of Denver, CO, three sons, Edward (Barbara) Brooks, of Taylorville, Michael “Bill” (Carolyn) Brooks, of Clark, MO, and Todd (Judy) Brooks, of Castle Rock, CO, 12 grandchildren, and 20 great-grandchildren. Also surviving is a sister Dorcas (Fred) Deckard, of Princeville, two stepsons Tom (Terri) Brownfield, of Havana and Bob Brownfield of Seattle, WA. In addition to her parents and husband Wilbur, Nancy was preceded in death by a son James Brooks, stepson Michael Brownfield, a great-grandchild, Greta Maria Nelson, and her siblings Bill, Bandy, Mary Jane Duley, and Charlotte Braden. The family will receive friends on Saturday, July 23 from 10:00 a.m. to 11:00 a.m. at the Mason City United Methodist Church, 100 E. Pine St. in Mason City, with the funeral service following at 11:00 a.m. Paster Molly Spence-Hawk will be officiating. The burial will proceed immediately following the service at the Mason City Cemetery. Memorial contributions may be made to the Mason City Reimagine Foundation in Nancy’s honor. Online condolences may be made to www.hurleyfh.com Hurley Funeral Home in Mason City is in charge of the arrangements.