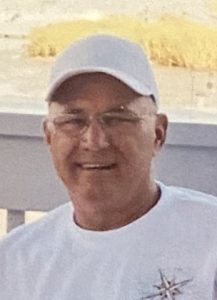 Gary D. Gilbreath, 76, of Havana passed away at 6:18 p.m. on Sunday, July 3 at OSF St. Francis Hospital in Peoria after a brief and sudden illness. Gary was born on April 12, 1946 in Canton to Glenn K. Gilbreath and Edith M. (Watson) Gilbreath. He married Patricia (Noble) Gilbreath at the First Baptist Church in Havana on February 7, 1971, where the Reverend Peter Borzeka performed the ceremony. Gary is survived by Patricia, his wife of 51 years, his daughter Melissa Glaub-Mullen (Kenneth Mullen), one grandson, Adam M. Gilbreath-Glaub, all of Metamora, sisters-in-law, Lynne Shoemaker (Richard Shoemaker), Kim Branscum, and brothers-in-law Mike Noble (Debbie Noble) and Kevin Noble (Kelly Noble), all of Havana. Also surviving Gary are aunts Carolyn Rector (Gene Rector) of Ipava and Georgina (Pat) Burgett of Canton, as well as many cousins and extended family. Gary was preceded in death by both of his parents, father-in-law Olen Noble, and mother-in-law Bernadine Noble. Gary was a 1964 graduate of Havana High School, where he was a 4-year Letterman Athlete of track, football, and baseball. Upon graduation, Gary enlisted in the U.S. Navy on January 19, 1965 for 6 years. His Naval career after training in Florida to become a Sonarman took him to Oahu, Hawaii Naval Station Pearl Harbor, where he was assigned to the Destroyer USS Forster (DE-334) West Pac Cruise where he completed 4 tours of duty to Vietnam. Gary received an Honorable Discharge from active duty from his last duty assignment on the USS Bryce Canyon (AD-36) in Long Beach, California. He then served 2 years reserve inactive and separated from the Navy on January 18, 1971. After returning home from the Navy, Gary began working at Caterpillar, Inc. in building SS East in Peoria, first as a machinist on a chipper and then moving to the transmission assembly line. He later transferred to Mossville engine assembly in building BB, where he retired in September 1999. Gary was often working at Caterpillar for their PR film footage and was even seen on CNN and other national networks during his time at Mossville. Gary was honored and very proud of his military service to his country. Since his retirement, he continued to be active by participating as a member of the Honor Guard Detail for Mason County area deceased veterans. He was a member of the Rifle Party who performs the Three-Volley Salute. Gary was a life member of the Havana VFW Post #6408 and the American Legion Post #138. Gary loved the outdoors and spending time with his family members, camping, and fishing. He was always busy and preferred being outside working if possible. He had a great love and talent for woodworking that he not only shared with his grandson, Adam, but also passed onto him the talent. Those who knew Gary would recognize his smile and contagious laugh that was normally the result of his ornery sense of humor. Gary loved a good laugh. That being said, Gary also was a loving husband, father, and grandfather, a dedicated family man, hard worker, and a dependable friend. In the past three years, Gary began a new hobby of making crosses from the empty cartridges that were fired at military funerals. He made each one by hand, as well as the wooden stands and a dog tag if time and information were available. He gave these crosses to Veterans of WWII, Korea, Vietnam, Afghanistan, and Iraq, or to their families. At the time of his passing, he had made and given in excess of 120 crosses. It was a passion of his and he was very honored to able to do it. He will be greatly missed by all who knew and loved him. A memorial service will be held on Wednesday, July 13 at 10:00 a.m. at Hurley Funeral Home in Havana. Rev. Randy Green will officiate. Burial will follow the service at Laurel Hill Cemetery in Havana. Memorial donations may be made in Gary’s name to St. Jude Children’s Hospital or the Wounded Warrior Project. Online condolences can be left for his family at www.hurleyfh.com. Hurley Funeral Home in Havana is in charge of his arrangements.