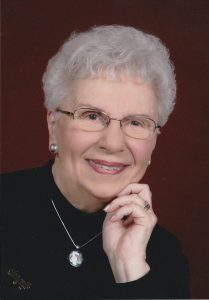 Mary A. Wilson, long-time resident of Canton, died July 3 while in hospice care in Bloomington. Mary was born May 19, 1929 in Chicago to T. Rudolph and Myrtle (Lloyd) Andersen and resided with them first in South Chicago and then East Chicago, IN until her marriage in 1951. She attended and graduated from National-Louis University in Evanston with a degree in elementary education. Reluctantly agreeing to go on a blind date with her best friend from high school to Beloit College, WI, she met her future soul mate and lifelong love, William D. Wilson. Mary and Bill fell immediately in love and were joined in marriage on February 2, 1951 in East Chicago. He preceded her in death in 1991. Together they raised four children. While money was very tight during their parenting years, their love for one another and their children was boundless. Mary and Bill were the parents of two sons and two daughters: Randy (Melissa) Wilson, formerly of Canton, now Bloomington; Jeffrey (Jill Bennett) Wilson of Alberta, Canada; Carol (Charles Vasconez) Wilson of Shorewood; and Pamela Wilson of Austin, Texas. Mary is also survived by four grandchildren: Aaron Wilson of Bloomington; Sierra Wilson of rural Princeville; Jeremy Wilson of Kelowna, British Columbia, Canada; and Julianne Wilson of Alberta. She is the great-grandmother of Ian and Josephine of Bloomington and Addison of Canada. Also surviving are a nephew and three nieces. Mary was preceded in death by her older sister, Dorothy, and her husband, Warren Fish; and her younger brother, R. Clifton Andersen and his wife Carolyn. She was also preceded in death by her husband’s three siblings and their spouses. Mary was a lifelong member of the First Presbyterian Church, first in Oregon and then Canton from 1966 to date. During this time, she served as an Elder of the Session, the Board of Deacons and Christian Education. She attended the church’s Women’s Bible Study and Morning Circle groups. She and Bill also sang in the Chancel Choir for many years. She was a member of P.E.O Chapter LY and the Canton Woman’s Club. She was a supporter of the Spoon River College Foundation, Fulton County Humane Society and Wildlife Prairie Park, as well. Most of Mary’s career was spent raising four children and tending house, but she also worked for over ten years in the accounting department of Canton Community Bank and as receptionist/bookkeeper for Dr. Derry’s dental practice in Canton. Mary is remembered by her family, friends and community members as a kind, gracious and loving person with a great sense of humor and warm personality. She had a beautiful voice and enjoyed playing the piano all her life, even taking further lessons to sharpen her skills after her husband’s death. She was a very thoughtful sender of notes, cards and letters, keeping in touch with a large network of family and friends. At her request, and honoring her wishes, there will be no visitation or memorial service. A private gravesite internment for family will be held at a later date. Memorial contributions in her name may be sent to the First Presbyterian Churchin Canton or the Fulton County Humane Society.