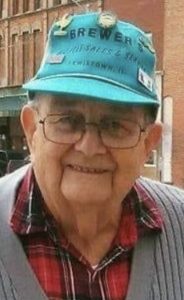 Virgil W. Brewer, 90, of Lewistown passed away June 27 at Wesley Village in Macomb where he was a resident. He was born January 26, 1932 at Decatur, the son of B.C. and Lena (Letner) Brewer. He married Ethel Leonard on October 27, 1956 at Providence Church at rural Lewistown. She survives along with three children, Ed (Adrina) Brewer of Lewistown, Virginia Baumgartner of Bloomsburg, PA; and Delbert (Annette) Brewer of rural Banner, eight grandchildren, twenty-four great grandchildren, and two great-great grandchildren. He was preceded in death by his parents, three brothers, one sister, and a son-in-law, Pastor John Baumgartner IV. He was currently a member of the First Baptist Church in Colchester, and also served the Lord in the former First Baptist Church of Lewistown and the Grace Baptist Church in Havana. He graduated from Wyoming High School class of 1950. Virgil was a Korean War Veteran serving in the U.S. Navy from 1951-1955 where he was stationed at Hickam Air Force Base (Pearl Harbor) Hawaii and the Naval Base at Astoria, OR. In the early years, Virgil farmed and operated their Grade A dairy farm. He was later employed by the State of Illinois where he worked at Dickson Mounds Museum as a stationary engineer. He also owned and operated Brewer’s Bicycle Shop in Lewistown for many years where he repaired and sold bicycles for many customers. He especially enjoyed Whizzer and Schwinn bicycles, several of which he restored as a hobby. Virgil’s family would like to thank the staff at Wesley Village in Macomb and the Compassus Hospice team for taking such wonderful care of Virgil. May the Lord bless you. Funeral services will be held at 11:00 a.m. Wednesday July 6th at the Henry-Lange Memorial Home in Lewistown with Pastor Caleb Sparrow officiating. Burial will be at Oak Hill Cemetery in Lewistown with military services conducted by the U.S. Navy, Lewistown VFW Post 5001, and Lewistown American Legion Bishop Post 1. Visitation will be held from 5-7 p.m. Tuesday July 5th at the memorial home. In lieu of flowers memorial contributions may be made to First Baptist Church of Colchester, Wesley Village of Macomb, or Compassus Hospice of Galesburg. To view Virgil’s life tribute video or to send online condolences visit henrylange.com.