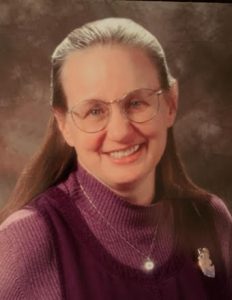 Nancy Iona (Flint) Glick, 67, of rural Havana passed away Monday morning, June 14 after a long, courageous battle with melanoma. Nancy was born on February 8, 1955, to Robert and Julia (Blanchard) Flint in Indianapolis, IN. She graduated from high school in Brussels, Belgium, where her father was stationed with the FAA. She then returned to the United States to attend Cornell College in Mt. Vernon, Iowa, where she received her bachelor’s degree. She later received her master’s degree in library science from the University of Illinois. Nancy married John H. Glick of Havana (formerly Pekin) on June 7, 1980 at St. Paul’s Lutheran Church in Havana. After their marriage, Nancy moved in with John on the Glick family farm in rural Havana. She became the Director of the Havana Public Library and served in that profession for many years. Her husband John preceded her in death on July 16, 2007. Nancy was also preceded in death by her parents and her father-in-law, Merle Glick, of Pekin. Nancy is survived by her long-time partner, Mark Curran of Morton, her mother-in-law, Barbara J. Glick of Pekin, her brother-in-law, Jeffrey (Patti) Glick of Cupertino, CA, and two sisters-in-law, Claudie (Steve) Huey of Pekin, and Laurie (Ken) Klopfenstein of Peoria. She is also survived by four nieces and nephews, Greg (Maegan) Knapp of Peoria, Carrie (Austin) Blessman of Germantown Hills, Kevin Glick of San Jose, CA, and Stephanie Glick of Castle Rock, CO, five great-nieces and nephews, plus many cousins and Anna Oest. Nancy loved literature, antiques, weaving, spinning, knitting, local history, cats and dogs, and promoting the arts. She was exceptional at making friends, and she will be missed by so many of them. Nancy’s funeral will be held on Friday, June 24 at 11 a.m. at St. Paul’s Lutheran Church in Havana, where she was a member and former member of the choir. Visitation will be held at the church from 9:30 to 11 a.m. prior to the service. The family requests no flowers, please. Memorials may be made to St. Paul’s Lutheran Church, 121 N. Pearl Street, Havana, IL 62644.