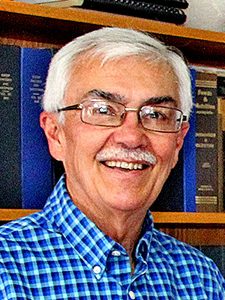 Gregory Alan Deakin passed away peacefully but unexpectedly June 12 in his hometown of Cuba. He was born February 7, 1952, to Alan L. Deakin and Marjory J. (Hamm) Deakin. Being the youngest of three kids, he was dragged around to all kinds of activities, 4-H, sports, bands and more. Greg began his career with sheep as a 4-H project in 1958 with five Hampshire ewes purchased from Deep Valley Farms in Fiatt, a noted Hampshire flock, winning Chicago Championships with “Coal Dust” and “Coal Dust Laddie.” Making countless friends along the way, he took the project to record heights – from county fairs to the North American International Livestock Exposition. As a teenager and through his college years, Greg showed sheep on the Western Illinois County Fair Circuit, carrying strings of Hampshires, Suffolks, Corriedales, and Oxfords along with other Fulton county friends who also grew up to be influential in the sheep industry, including Conrad Cattron, Robbie Ladd, and Curt Overcash. He received the Illinois Sheep Proficiency Award with the FFA his senior year of high school. An Oxford ewe he showed for Jim Hanson of Wisconsin won back-to-back Grand Champion Ewe honors at both the 1971 and 1972 Chicago International. Throughout his life, he found time to raise and show the family’s flock of Hampshire and later, Border Leicester sheep, winning many Champion Banners along the way. During school, Greg played in the school band, plus played drums in the garage band Shades of Blue. Town people could hear them practice two miles away. Even after the group was long disbanded, the “Barefoot Drummer” could be found dashboard drumming anytime a good song came on the radio, especially Journey’s “Don’t Stop Believing.” Going to college was a given in his life. Following high school graduation in 1970, he went on to attend the University of Illinois from 1971-1973, where his life-long love of the Orange and Blue began. While there, he joined the FarmHouse fraternity and served (fittingly) as their social chair. At the end of his junior year in 1973, he had the opportunity to go to work for Larry Mead at the Sheep Breeder Magazine as Assistant Editor while taking classes at the University of Missouri. After a year and a half at The Sheep Breeder, the orange and blue in his blood took him back to Illinois where he completed his degree in Agricultural Sciences. Greg next went to work for Production Credit Service in Watseka after graduation from 1974-1978. Then, with the encouragement of Rollie Rosenboom and his experience learned from Larry Mead, Greg decided to pursue his dream of starting his own magazine with the help of childhood best friend, fraternity brother and college roommate, Curt Overcash. The two began their 3-year partnership with the first issue of The Suffolk Banner in March of 1978. Seeing their venture successful caused Greg to leave PCA and move back to Cuba to the family farm to go full time in the magazine business. This move also allowed him to help his recently retired coal-mining father. While back in his hometown, his daughter Rachel was born in 1981. In 1991, Greg married wife, Debora (Alford), with whom he celebrated their 31st wedding anniversary on February 2nd of this year, a date selected around show and sale schedules and a well-timed lambing season. Greg and Deb first welcomed daughter Tiffany in 1993 and then son Colin in 1996, and all three of his children were actively involved showing sheep growing up. In 1994, the decision was made to expand the magazine to an all-breeds publication, becoming simply, The Banner Sheep Magazine. As part of his life’s work promoting the sheep industry, he served as the official photographer for the North American International Livestock Exposition, Eastern States Exposition, and Keystone International Livestock Exposition, to name a few, and was the voice of the Eastern States Expo for many years. Locally, he owned and ran the town paper for a number of years, the Cuba Journal. Nationally, in addition to his Banner roles, Greg served as President of the American Border Leicester Association as well as on their board of directors; he was also on the ASI Road Map Committee; and Greg was a USDA-appointee to the 13-member American Lamb Board as the seedstock representative from 2018-2021. Some of the recognition he received for his work in the industry include: the 2010 Ohio Sheep Industry Distinguished Service Award; the William Doak Special Achievement Award at the 2013 Midwest Stud Ram Sale; the 2011 ASI Shepherds Award for Media; 2018 United Suffolk Association Hall of Fame; and 2019 Wisconsin Sheep Barn Hall of Fame. Greg made his life’s work to promote the purebred and registered sheep industry, and always said it was the many friendships made along the way that made his career so rewarding. To quote him, “If you love what you do, you’ll never work a day in your life.” While many knew him as one of the most hard working men around, in his eyes, he didn’t work a day in his life. He never met a stranger, and made friends with everyone he talked to. He influenced generations of livestock showmen from coast to coast and made lasting impressions on his local and sheep communities. He will be sorely missed by those who knew him. He is survived by wife Debora of Cuba, children Rachel Deakin, Lewistown; Tiffany (Tim Smear) Deakin, Farmington; Colin (Alex Thomas) Deakin of Cuba; siblings, Reita (David) Harn, Lewistown, Garrett (Kathy) Deakin, Springfield; and grandchildren Matthew Smith and Hayley Lyons. A viewing will be held at the Henry Lange Memorial Home, located at 322 E Main St in Cuba on Sunday, June 19th from 2-5 p.m.. Funeral services will be held Monday, June 20th, at the same location, at 10:30 a.m. followed by interment at the Cuba Cemetery following the services. Memorials can be made to: The Greg Deakin Memorial Scholarship, ℅ The Banner, P.O. Box 500, Cuba, IL 61427; Cass-Putman Rescue, 516 E Jefferson St, Cuba, IL 61427; or the sheep show of your choosing.