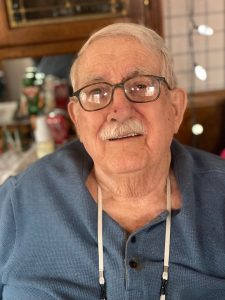 Johnnie R. Marshall, 88, of San Jose passed away on Sunday, June 12 at Mason City Area Nursing Home. He was born on February 1, 1934 in Decatur to Wilbur and Elsie (Woods) Marshall. He was lovingly raised by his uncle and aunt Verna and Nola Coburn. On February 22, 1958 in San Jose he married Helen Hopwood who preceded him in death. Johnnie is survived by 3 children: Steve (Joan) Marshall of Havana, Stacy Powell of Missouri and Sally (Audie Rex Jr.) of San Jose, 9 grandchildren, 5 great-grandchildren one-step sister Shirley Taylor, and a special friend Geneva Behrends. He was preceded in death by his parents, 2 sisters, 2 brothers, and 1 step-brother. Johnnie served in the United States Air Force during the Korean War, retired from Caterpillar after 38 years as a quality control inspector, was a member of the San Jose Methodist Church, was active with the Masonic Lodge in Delevan, San Jose American Legion, Lions Club and was a retired volunteer fireman in San Jose, he served for 10 years on the San Jose Village Board. A funeral service is scheduled for Friday, June 17 at 10:30 a.m. at San Jose United Methodist Church in San Jose. A visitation will be held on Thursday, June 16 from 5:00 to 7:00 p.m. also at the church, Masonic Rites will be held during the visitation at 6:45 p.m. Memorial contributions can be made to the San Jose United Methodist Church or the San Jose volunteer fire department. Online condolences can be left at www.hurleyfh.com. Hurley Funeral Home in San Jose is in charge of the arrangements.