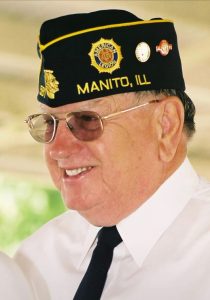 Max H. Schimmelpfenning, 90, of Manito, passed away, Wednesday evening, June 8 at Unity Point Health, Methodist Hospital in Peoria. He was born July 7, 1931 in Mason County to the late Jake and Laura Fuller Schimmelpfenning. On December 30, 1955, he married Donna Spaits in Manito. She survives. He was a Transport driver for FS in Kingston Mines for 32 years, and served the Teamsters Local 627 as a Union Steward and Business Agent, until his retirement. Max was a U.S. Army veteran and served in the Korean War, and was a member of the Manito, Hill-Palmer American Legion Post 561, and assisted in many Veteran’s organizations. He was the Manito Township Clerk for over 40 years, and was awarded the first ever William. Z. Ahrends award for Township Officials in the State of Illinois. A member of the Democratic Party, Max served as a precinct committeeman over 40 years. He served as a Red Cross bloodmobile volunteer, was Village ESDA Director for numerous years, was a member of the Manito Masonic Lodge 476 for over 40 years, and was a 20 year member of the Forman Fireman Department. Max is survived by his wife, Donna S. Schimmelpfenning, two daughters, Kim (Steve) Singley, of Manito, and Tami (Jerry) Spraggs, of Manito, two sons, Troy (Jamie) Schimmelpfenning, of Pekin, and Kyle (Cheryl) Schimmelpfenning, of Pekin, six grandchildren, and two great-grandchildren, and his beloved dog and shadow, Mya. Also surviving are two sisters, Hazel (Kenneth) Stansbury, of Tremont, and Wilma Gascoigne, of Amboy, two brothers, John Schimmelpfenning, of Effingham, and Richard Schimmelpfenning, of Manito. In addition to his parents, Max was preceded in death by a sister, Stella Lewis, two brothers, Arthur and Frank Schimmelpfenning, three sisters-in-law, Sue, Shirley and Bev Schimmelpfenning, and two brothers-in-law, Don Gascoigne, and John Lewis. A visitation will be held at the Community United Methodist Church in Manito where he was a member on Monday, June 13 from 4:00 p.m. to 6:00 p.m. A funeral service will be held on Tuesday, June 14 at 10:00 a.m. at the Church, with the Rev. Steve Oaks and Roger Thomas officiating. Burial will follow in Meadow Lawn Cemetery with Military Graveside Rites provided by the Hill-Palmer American Legion Post 561. Memorials may be made to the United Methodist Community Church. To leave messages of comfort and condolences for the family, please visit www.hurleyfh.com Maas-Hurley Funeral Home is assisting the family with arrangements.