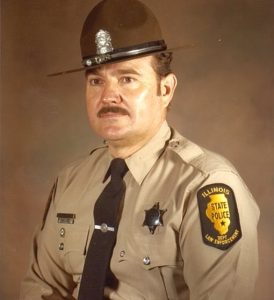 Rollin L. Rumler, 87 of Canton, passed away at 11:40 p.m. on Tuesday, May 31 at The Loft in Canton. He was born on December 1, 1934 to Howard and Elva (Sprague) Rumler. Rollin is survived by six children; Maria Lillard of Oregon, Vonda (Matt) Fell of Tennessee, Keri Lynn (Andy) Hensley of Canton, John Rumler of Illinois, Ted (Rachel) Rumler of Canton, and Tim Rumler of Canton; 15 grandchildren; several great-grandchildren; two sisters, Reta Kirkpatrick of Canton and Leta Stufflebeam of Canton. He is also survived by his significant other, of over 30 years, Judy Rench, and his grandson, Gage Barclay that they raised together. He is preceded in death by his parents; one son, Rollin Kent Rumler; six brothers; and one sister. Rollin was a State Police Officer from 1956-1984. He worked for Mitsubishi for 10 years and Holthaus Construction for over 20 years. He was a member of Sons of the American Legion and Post Master for the Morning Star Masonic Lodge for 50 years. He was also a member of the Canton Elks Lodge, Farmington Moose Lodge 1571 and Modern Health and Fitness. He revived the American Legion Canton Baseball in the early 1980’s. A visitation will be held from 11:00 a.m. – 1:00 p.m. on Saturday, June 4 at Sedgwick Funeral Homes & Crematory in Canton. A Celebration of Life will be held at the Canton American Legion following the visitation. Cremation rites will be accorded following services. Memorials may be made to Sons of the American Legion or St. Jude Children’s Research Hospital. To view Rollin’s DVD or to make online condolences you may go to www.sedgwickfuneralhomes.com