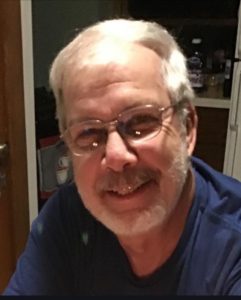 Larry D. Vaughn, 72, of Canton, passed away at 10:54 a.m., Friday, May 13 at the Graham Hospital Emergency Room. He was born on September 17, 1949 in Canton to Dale and Lavonne (Fulton) Vaughn. Larry married Ruth Ronketto on August 22, 1970 in Canton. She survives along with one son Christopher (Jessica) Vaughn, two sisters; Debra (David) Cape of Canton and Karen (Kenny) Vanhouten Jr. of Canton, two grandchildren; Nevah Marie Vaughn and Vincent Vegas Vaughn and Bruce Fulton whom was like a brother. He was preceded in death by his parents, brother-in-law Mike Ronketto and nephew Eric Cape. Larry retired from Pekin Energy and was a member of Shields Chapel United Methodist Church. He was a veteran of the Army National Guard and a life time member of the American Legion. Larry was an avid gardener and billiards player. Graveside services will be 10 a.m. Thursday, May 19 at Shields Chapel Cemetery in rural Canton. In lieu of flowers memorials can be made to either Shields Chapel Cemetery Fund or the Parlin Ingersoll Library. Oaks-Hines Funeral Home in Canton is in charge of arrangements. To leave online condolences please visit, oakshinesfuneralhome.com