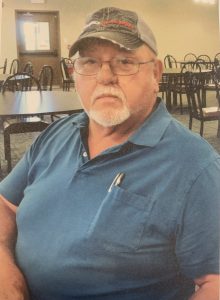 Richard “Dick” Scott Bohm, 75, of Lincoln formerly of Havana passed away on Thursday, May 12 at Lincoln Memorial Hospital. He was born on July 31, 1946 in Havana to Orville and Dorothy (Blakley) Bohm. On May 25, 1969 in Havana he married Ginger Vaughn she preceded him in death in 2013. Dick is survived by 3 daughters; Julia (Jeff) Eldert of Las Vegas, NV, Holly (Harry) Koontz, Lisa (Jeremy) Letterle both of Lincoln. Also surviving are seven grandchildren; Olivia, Maegan and Hannah Eldert; Ashton and Hailie Koontz and Preston and Corbin Letterle and one great granddaughter Kingsley Rae Letterle, 3 sisters; Elenora Gilson, Marjorie Friedrich and Janet Lafary. He was preceded in death by his parents, his wife, grandson Alexander Scott Koontz, brother Robert Bohm and sister Phyllis Graham. Dick was a 1964 graduate of Havana High School and was a lifetime member of the Iron Worker Local #46 in Springfield, he was a member of the Havana Church of Christ. He enjoyed garage sales, auctions, his McDonald’s coffee drinking crew and spending time with his girls and grandchildren. Funeral service will be held on Thursday, May 19 at Noon at Hurley Funeral Home in Havana with Rev. Bill Boyce officiating, burial to follow at Laurel Hill Cemetery in Havana. Visitation will be from 10:00 a.m. until the time of service at noon. Memorial contributions can be made to the American Diabetes Association. Online condolences van be left at www.hurleyfh.com. Hurley Funeral Home in Havana is in charge of the arrangements.