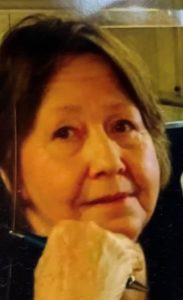 Billie S. Howarter, 80, of Canton, passed away at 8:30 am, Thursday, March 17 at OSF Richard L. Owens Hospice Home in Peoria. She was born on August 13, 1941 in Canton to Robin G. and Ruth E. (Williams) Stockman. Billie married Tyler R. Howarter Sr. on January 17, 1959 in Canton. He preceded her in death on March 4, 2003. Also preceding her in death were two sons Brandon G. Howarter and Chris R. Howarter, twin brothers (Ralph and Randy Ellis) and one sister (Joni “Joni Jean” Daum). Surviving are two children; Shelli (Wayne) Swope and Tyler (Brenda) Howarter Jr., both of Canton, sister Sharlee Utsinger, her significant other of many years, Randy Burnham, six grandchildren: Zachary Howarter, Katy (Nick) Tinsman, Tara Howarter, Kristen (Jake) Beoletto, Samy (Paul) Gonstal, and Alexandra Howarter, and nine great-grandchildren: Ethan, Taylor, Owen, Claire, Lyric, Cash, Mia, Nora, and Alice. Billie was known and loved by her grands and great grands as “Nan” and “Nanny Bird.” In her youth, Billie, along with her sister Sharlee, were lead members of the traveling, performance group, known as the “Little Sisters Square Dancers.” She was a born performer and loved the spotlight, while square dancing, clogging, tap, ballet, and cheerleading. Her time with the Little Sisters Square dancers allowed her the opportunity of singing as a solo vocalist on the Chicago Radio, and meeting Arkie the Arkansas Woodchopper, Bob Atcher, Dolphin Jewitt, Lulubelle & Scotty, and Homer & Jethro. As a teenager, while out with her friends at the Silverleaf Roller Rink, she met her very own Elvis look-alike, and love, Tyler Howarter. They married and raised 4 children together. Their generosity was second to none, as they rented homes for free, to many local families trying to get back on their feet, fed anyone who needed a meal, and was a parent or grandparent to anyone and everyone. Billie loved riding, and raising horses, trail riding, drinking coffee all day long, mushroom hunting, finding mustard greens, gardening, cooking huge holiday meals, gambling at the Paradise Riverboat, hosting her Pinochle club, playing Pitch competitively at the Eagles Lodge, and for fun, around her kitchen table, reminiscing about her time in Liverpoo as her fondest, childhood memories, and loved all things Elvis. She has a painted mural in her living room, that is featured on postcards in Graceland. Billie attended Glasford middle school, Canton High School, obtained her GED, and completed her Associates degree at Spoon River College, with a focus in Mathematics and Slide Rule. She worked at Tempo, and worked as a dispatcher for the Canton Police Department. She founded the Fulton County Ambulance Service before it became a publicly owned entity, and owned and operated the Fulton County Medi-Coach (a low-cost, non-emergent, medical transportation service). She later worked at Canton Walmart as a CSM, until retirement in 2011. Graveside services will be held at 3 p.m., Saturday, April 2 at Orendorf Cemetery, in rural Canton. Oaks-Hines Funeral Home and Crematory, in Canton, are in charge of arrangements. Memorials may be made to the Zachary Howarter Trust, at Bank of Farmington, Canton. To leave online condolences, please visit www.oakshinesfuneralhome.com