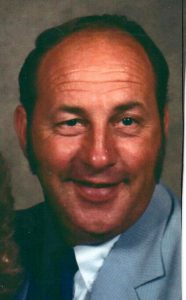 John R. DeFord, 80, of Lewistown passed away at 8:38 p.m. Saturday March 12 at Graham Hospital emergency room in Canton. He was born September 15, 1941 at Table Grove the son of Ross and Mildred (Stremmel) DeFord. He married Janice J. Lasswell on September 29, 1962 at Lewistown. She died October 23, 2021. He was also preceded in death by his parents, three brothers, and one great grandson, Wesley Prytherch. Surviving are two sons, Scott (Sandi) DeFord of Lewistown, and Brad DeFord of Lewistown, two sisters, Linda Lane of Cuba, and Joanne Lindsey of Canton, five grandchildren, Ericka (Jake) Waterman of Golden, CO; Harley DeFord of Havana, Karley (Frank) Prytherch of Dawson, Michael Hibser of La Crosse, WI; and Jonathan DeFord of Lewistown. John retired from Caterpillar with 35 years of service. After retiring he enjoyed driving fertilizer trucks for area fertilizer companies and also enjoyed hauling grain for several local farmers. He was a member of the Illinois Street Christian Church and UAW Local 974. While working at Caterpillar he was a member of the Caterpillar Mapleton Fire Department and had achieved the rank of Captain. He was also a volunteer for the Lewistown Fire Department. John was a former City of Lewistown alderman where he served for several terms. He enjoyed horses and spending time with his grandchildren. Funeral services will be held at 10:30 a.m. Thursday at the Henry-Lange Memorial Home in Lewistown with Reverend Brant Reed officiating. Burial will be at Oak Hill Cemetery in Lewistown. Visitation will be held from 5-7 p.m. Wednesday at the memorial home. In lieu of flowers memorial contributions may be made to the Illinois Street Christian Church. Online condolences may be made at henrylange.com.