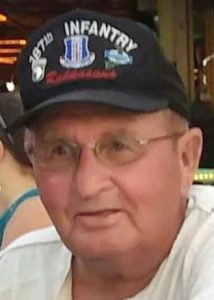 Dennis E. “Skip” Robertson, 74, of Ipava, passed away at 6:18 a.m. on Thursday, March 10 at his home. He was born on Thursday, December 18, 1947 in Canton, the son of Philip and Doris (Curless) Robertson. Dennis married Peggy Hackman on November 8, 1980 in Havana. She survives. Also surviving are his children, Nick (and Jenny) Robertson of Ipava, Robert (and Ricci) Easley of Marble Falls, TX, Trent (and Laurie) Robertson of Astoria, Shawn Easley of Ipava, and Clark (and Crystal) Robertson of Tennessee, his mother, Doris Robertson of Ipava, 19 grandchildren, Rikki, Ashley, Kylie, Ryan, Brittany, Sarah, Karah, Allysa, Madison, James, Detrik, Alexa, Taylor, Thomas, Tanner, Tyanna, Bryton, Gabriel and Emma, 13 great-grandchildren, sister, Hila Phillips of Canton, 3 brothers, Steve Robertson of Ipava, Chris (and Jan) Robertson of Avon, and Allen (and Sheila) Hackman Robertson of Ipava and many nieces and nephews. Dennis was preceded in death by his father, Philip, nephew, Dalton Blakley, and great-nephew, Cole Posey. Dennis served in the Vietnam War from 1968 to 1969. While serving in Vietnam, Dennis was a RTO who carried the radio for Lt. William Pray and 2 others. He was a part of the retaliation efforts after the Tet Offensive. After the war, Dennis served in the US Army Reserves, retiring after 20 years. He was known by his fellow reserves as “Pops”. Dennis was a true patriot and the military was a major part of his life and very important to him. Because of this, Dennis took on several projects that honored his country and the Veterans that served it, including designing and helping build the Veteran Memorial in Ipava. Dennis was a life long brick mason. He began by helping his dad build, including Western Illinois University buildings. He later became a bricklayer foreman for Stobeck Masonry for 8 years. He would go on to work as a foreman for Williams Brothers in Peoria for 17 years, retiring in 2006. Dennis was member of the Ipava Masonic Lodge, Ipava American Legion Post #17, and the Havana VFW. He enjoyed hunting, fishing, woodcarving, and telling and writing stories. He also enjoyed tracking and watching birds, especially humming birds and purple martins. He would even build purple martin birdhouses and have them at his house. To his family and friends, he was known as the dog whisperer and could train any dog brought to him. He also bred and raised British labs. Dennis also was an avid Chicago Cubs fan, win or lose. Services will be held at 2 p.m. on Monday, March 14, at Shawgo Memorial Home in Astoria. Kevin Kessler will be officiating. A visitation will take place one hour prior to the service. Military rites will be provided by the Ipava American Legion and Masonic rites will be provided by the Ipava Masonic Lodge. Cremation rites will be accorded after the service. Memorials may be made to the Ipava American Legion Post #17.