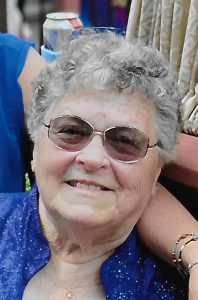 Marcia A. Miller, 89, of Lewistown, passed away Thursday November 18 at Red Oak Estates in Canton. She was born December 29, 1931 at Marietta, the daughter of Clarence and Cecelia (Oliver) Smith. She married Dale E. Sheets on July 3, 1949 at Marietta. He died December 23, 1973. She later married Owen Miller on February 26, 1975 at Palmyra, MO. He survives with four children, Michael (Tricia) Sheets of Morton, Karen (Jeff Fricke) Schainker of Petersburg, Kathy (Tom) Settles of Canton, and Patrick (Christinane) Sheets of St. David, ten grandchildren, six great grandchildren, and two great grandchildren on the way. She was preceded in death by her parents, one grandchild, and two brothers. Marcia worked 20 years at the former Farmers State Bank in Lewistown. She was a 70 year member of the Illinois Street Christian Church in Lewistown, and a member of the Lewistown Professional Women’s Club. She had also served on the board of the Spoon River Towers in Lewistown. Marcia loved her farm, and enjoyed gardening, canning vegetables, and was an accomplished seamstress. A graveside services will be held at 11:00 a.m. Monday November 22 at Oak Hill Cemetery with Pastor Brant Reed officiating. There will be no visitation. Memorial contributions may be made to Lewistown Fire and Rescue or the Illinois Street Christian Church. Condolences may be made at henrylange.com