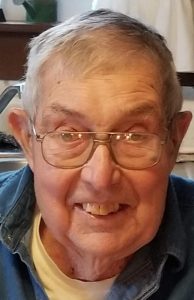 Dale Vaughn, 96, passed away on Tuesday, November 9 at Graham Hospital in Canton. He was born on January 10, 1925 in Canton to Clayton and Lanah (Danner) Vaughn. He married Lavonne Fulton on February 22, 1947 in Canton. She preceded him in death on September 17, 2016. Surviving are his children, Larry (Ruth) Vaughn of Canton, Debra (David) Cape of Canton, Karen (Kenny) VanHouten Jr of Canton, seven grandchildren, Christopher (Jessi) Vaughn, Michele (Scotty) Blanchard, Jennifer (Glen) Williams, Kenneth (Cortney) VanHouten III, Keeli (Kyle) Lindmark, Kayla (Chad) Buchen, fourteen great grandchildren, Nevaeh, Vegas, Whitney, Addy, Bryce, Zane, Maddex, Vaughn, Kash, Kallen, Corinne, Kasen, Eva, Lucy and two great great grandchildren, Charlee and Waylon. He was also preceded in death by one brother, Dwayne and one grandchild, Eric Cape. Dale served in the U.S. Army in the Pacific during WWII. He worked as a self- employed farmer in the Shields Chapel area his entire life. He was a member of the Shields Chapel United Methodist Church and served on the Board of Trustees for several years. He also served as the sexton of Shields Chapel Cemetery for many years and just recently retired. He drove a school bus for the Canton school district. A funeral service will be held on Friday, November 12 at 11 a.m. at the Oaks-Hines Funeral Home and Crematory in Canton with a visitation one hour prior at the funeral home. Due to COVID-19 the family requests that a mask be worn and please socially distance. Burial will be held at the Shields Chapel Cemetery. Memorials may be made to the Shields Chapel Cemetery To leave online condolences please visit www.oakhinesfuneralhome.com.