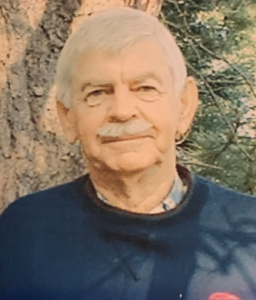 Donald D. Chrisman, age 85, of East Peoria, passed away at 11:56 a.m. on Saturday, October 16 at UnityPoint Methodist Medical Center in Peoria. He was born June 8, 1936 in Almena, Kansas to Cleon and Wilma (Dehut) Chrisman. He married Betty (Kempf) Chrisman on July 14, 1962 and she preceded him in death on April 19, 2013. He was also preceded in death by his sister Nancy Jean Huber and brother Clifford Chrisman. He is survived by his son Dennis Chrisman of East Peoria, brother, Robin Chrisman of East Peoria, and many nieces and nephews. In his free time, he enjoyed visiting casinos and caring for his lawn and garden. A visitation will be held at 9:30 a.m. on Thursday, October 21 at Remmert Funeral Home in East Peoria, with a funeral service beginning at 10:30 a.m.. Burial will be at St. Joseph Cemetery in West Peoria. Funeral arrangements have been entrusted to Remmert Funeral Home and condolences may be left at www.RemmertFuneralHome.com.