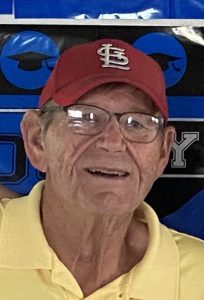 Garth E. Cripe, 77, of Astoria passed away Monday, October 4 at 7:05 in the morning at Mason District Hospital in Havana. Garth was born in Beardstown on October 8, 1943 to Robert and Maureen Crone Cripe of Astoria. He married Carolyn Long on June 27, 1970 at First Evangelical Lutheran Church in Beardstown. He is survived by his wife Carolyn, two sons Todd ( and Debbie Nitcher) of Auxvasse, Missouri and Scott (and Amanda) of Lewistown. He was quite proud of his grandchildren Landon Robert Cripe & Meagan Eileen Cripe of Auxasse and Lydia Alice Cripe, Charles Garth Cripe, and Adah Caroline Cripe of Lewistown. He is also survived by one brother, Brian (and Sharon) Cripe of Forsyth and their children Adam (and fiance Amanda); Garrett; and Sarah. Garth was preceded in death by his parents; mother-in-law Alice Hays Long Lebkuecher & father-in-law Robert Long, & father-in-law Charlie Lebkuecher, his brother-in-law Chuck Lebkuecher, and brother-in-law John Long. Garth graduated from Astoria High School in 1961 and went on to college to graduate from Canton Community College & then Illinois College in 1968. While in college he played football for the Illinois College Blueboys as a kicker and lineman. He was the first player to kick a field goal at the Central Methodist College in Fayette, Missouri at their then-new stadium. He was also the only kicker at Illinois College to return his own kickoff. He earned a bachelor’s degree in biology. He began his teaching career at Ashland High School and then completed his years of teaching at Astoria High School from 1970 – 1999 where he taught English, Biology, & Speech. Along with teaching he had a long coaching career that included football, basketball, and track. Garth worked many summers along-side his friend, Dick Keene as a contractor for Pioneer seed managing a corn detasseling crew. Garth was an Astoria Township supervisor for the city of Astoria for several years. Garth was an avid fisherman, spending many hours fishing with good friends Roger Mann, Ralph Matheny, his brother Brian, and best fishing buddy ever, his grandson Charlie. Garth enjoyed many family vacations to Minnesota to teach his family the fine art of catching a walleye, and how to give each other grief for outfishing one another. He practiced this often with his buddies while fishing at Roger’s. Garth was a charter member of the Astoria Lion’s Club. Garth also enjoyed hunting deer, duck, and turkey. He was a member of Ducks Unlimited and The National Wild Turkey Federation. For The National Wild Turkey Federation, he spent several years on the Spoon River Gobbler’s committee helping to organize the local annual fundraising banquet. Garth enjoyed playing cards and cribbage, a good crossword or sudoku puzzle, and lit up when his grandkids asked him to do anything with him whether it was fishing, playing a game, or teaching them to drive. Garth coached pony league during the summer as well as played slow-pitch softball where he played first base and pitched, and was famous for his out-of-the-park hits and self-invented sky-hook pitch. Garth was a St. Louis Cardinal’s fan, but an even bigger fan of all of the sports and activities in which his sons and grandchildren participated. Garth had a laugh that could stop you in your tracks and draw you in, usually preceded by a corny or off-color joke. He was happiest when he was with his family and friends. He always gave sound advice to his children and grandchildren. His love was unconditional. He is loved and will be missed immensely. Services for Garth will be held at Shawgo Memorial Home in Astoria with visitation taking place on Sunday, October 10 from 2:00-4:00 p.m. and funeral service taking place on Monday, October 11 at 10:00 am. Eric Trone will officiate. In Garth’s memory, his family is establishing a memorial scholarship. Memorials may be made to this fund in care of Ipava State Bank. Memorials may also be made to the Astoria Rescue Squad.