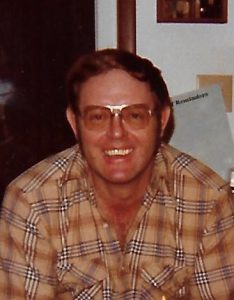 James H. Wilcoxen, 84, of Lewistown, passed away Thursday September 23 at the Illinois Veterans Home in Quincy, where he was a resident. Jim was born March 15, 1937 to Vern and Helen (Wilhelm) Wilcoxen. They preceded him in death along with his sister, Ruth Shields, and brother, Jack Wilcoxen. His surviving sister Patricia Graham resides in Springfield. Jim married Roberta Cross in 1958. She survives and resides in Springfield. Jim served in the Army and left for Korea in 1958, returning in 1960. He was a General Supply Specialist, and expert (rifle) marksman and received a GCM. Jim worked at Freeman United Coal Company for many years and then became an exemplary welder working in construction. Jim was a member of the Matanza Gun Club. He was a natural outdoorsman and had a few secrets when morel season came around. Jim has three children, Marc (Sharol), Phil (Sheryl), and Jo Ellyn. He was deeply proud of his kids. He also has five grandchildren that brought him immense joy and happiness. They will miss his great life stories and grandfatherly advise, not to mention his funny sayings and “Grandpa-isms”. He lived for annual family vacations in Wisconsin. He was always the one most excited and he could not contain it! Jim loved his family. He was a role model and a natural teacher of all things not printed in books or manuals. He leaves a legacy of kindness, love, and laughter. Cremation has been accorded. A memorial service will be held at 7:00 p.m. Wednesday September 29 at Henry-Lange Memorial Home in Lewistown, with Reverend Sue Roat officiating. Visitation will be held from 5-7 p.m. on Wednesday. Memorial contributions may be made to the Illinois Veterans Home in Quincy, or a Veteran’s charity of your choice. Condolences may be made at henrylange.com