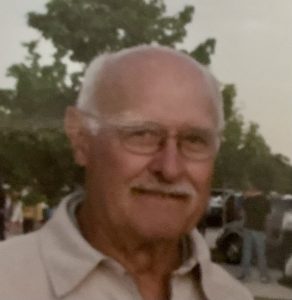 Robert William Kirby, 90, of Mason City, passed away on Monday, August 23 at 10:04 a.m. at Copper Creek Cottages in Lincoln. He was born on August 15, 1931 in Lincoln to William and Elsie (Hinck) Kirby. On November 10, 1957, he married Katherine Werner in Mason City. She survives. Other survivors include three children: Valerie (Paul) Martin of Grand Haven, Michigan; Jeffrey (Diane) Kirby of New Holland; and Douglas Kirby of Mason City. Bob had seven grandchildren: Cassander (Andrew) English, Andrew Martin, Katherine Martin, Samuel (Ashley) Kirby, Ashley Garcia, Jess Kirby and Mersades Kirby. He had five great grandchildren and many nieces and nephews. Bob was preceded in death by his parents and three sisters: Delores Allen, Patty Clifford and Donna Rae Wagoner. Bob was a member of the Mason City United Methodist Church, the American Legion and the VFW. He worked many years at the Mason City schools as a maintenance man and bus driver. Many students and teachers remember him fondly as a likable presence who could fix practically anything. He was an Army veteran of the Korean War and proudly served as a military policeman. He continued his service to the country by orchestrating countless military funerals for local veterans. Graveside services will be held at Mason City Cemetery on Friday, August 27 at 10:00 a.m., with Pastor Molly Spence-Hawk officiating, followed by Military Honors. Memorial contributions may be made to the American Legion Post 496, Mason City United Methodist Church or the Alzheimer’s Association. Online condolences may be left at www.hurleyfh.com. Hurley Funeral Home in Mason City is in charge of arrangements.