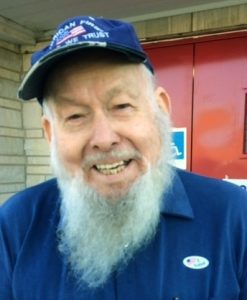 Victor L. Ebbert, 90, of Havana passed away at 10:40 a.m. Monday, July 26 at Mason District Hospital in Havana. He was born on April 20, 1931 in Oakland Twp., Schuyler Co. a son of the late John Leonard and Lillie Ray Goodin Ebbert. He married Thelma Louise Viebrock on October 20, 1958 in Rushville. She preceded him in death on June 17, 2011. He is survived by one daughter, Vicki Goben and husband David of Havana, two sons, Bill Ebbert and wife Judy of Litchfield, Jack Ebbert of Farmington, nine grandchildren, fifteen great grandchildren, one great-great grandchild, numerous nieces and nephews. He was preceded in death by five sisters, Lucille Curtis, Leona Smith, Mary Hill, Barbara Joan Ebbert, Doris Prather, two brothers, Louis Ebbert, Paul Ebbert. He was a U.S. Navy Veteran serving from 1951 to 1954. He and his wife operated Vic’s Gourmet and the Scripps Park Virginia in Rushville for many years. They then operated the Canton Country Club until he purchased the Townhouse in Havana. Later he was a meat cutter at Jack & Jill’s grocery store in Rushville. He then went back to Havana and started Vic’s Specialty Shop before retiring. Vic was a member and past commander of Schuyler American Legion Post #4. He was also a member of the VFW Post #7315, Rushville Moose Lodge #506 and Rushville Masonic Lodge #9 A.F. & A.M. Vic enjoyed cooking, gardening and bowling. He was an avid St. Louis Cardinal fan. Funeral services will be held at 12:00 p.m. Friday, July 30 at Worthington Funeral Home with Rev. Bill Rucker officiating. Interment will follow in Christian Neck Cemetery with military honors by Schuyler American Legion Post #4 and an U.S. Navy Honors Detail. Visitation will be held from 11:00 a.m. until the time of service on Friday. Memorials may be given to the donor’s choice. Private condolences and expressions of sympathy may be sent through the Worthington Funeral Home website at www.worthingtonfh.com