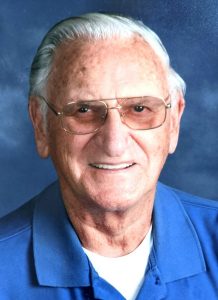 Myron (Jack) White, 93, of Courtyard Estates, Canton, entered eternal life on May 6, 2021, at Graham Hospital, after a short illness. He was born on March 1, 1928 in rural Ellisville to Wm. Myron and Florence (White) White. Jack married the love of his life, S. JoAnn Johnston on February 3, 1951, and they were married 61 years until her passing October 2012. They have two daughters, Martha (Marty) White, who passed November 2019. Surviving is their daughter, Rhonda Vogel and his favorite son-in-law, Matthew Vogel. Two grandsons, Nicholas (Katie) Vogel, of Champaign and Jacob Vogel, of Austin, Texas. Another joy in his life were his two great granddaughters. He was also preceded in death by his parents, two brothers, Charles and Marvin, and two sisters, Shirley O’Donnell and Dorothy Redinger. Jack was a son, brother, husband, father, grandfather, great grandfather, uncle and a friend to many. He loved his family dearly, but his two grandsons were his greatest treasure. He spent his formative years growing up on a farm in rural Ellisville, where all were welcome. He graduated from Ellisville High School. He worked at International Harvester in Canton for 40 years and had many stories of his years of working and the many people he met. Jack believed in a life of service to the Lord and his community. For 70 years he attended the First Baptist Church of Canton, where he served in many capacities, from the President of the Board of Trustees during the 1976 tornado, to the joy of playing on the church softball team. For many years, he loyally served on TPA, Canton Post; Canton International Harvester Retirees, East Elm Street Apartment Board, Canton Fisherman’s Club, Salvation Army Board, and was an active Bridge player in the community and was a faithful member of the Canton Masonic Lodge. He was a kind and loving friend quick with a joke, trying to bring a bit of humor to all he encountered. Please remember him by sharing a smile and passing on kind words to someone you see on your path in life. Cremation has been accorded and a celebration of life will be held, Saturday, July 17, from 1:00 – 3:00 p.m. at the First Baptist Church of Canton. Due to Covid- 19, masks are requested. Memorials can be made to the First Baptist Church of Canton, 301 E. Elm Street, Canton, Illinois. The Cremation Society of Mid-Illinois Co. Pekin/Peoria is assisting the family with arrangements. Online condolences may be made at csmico.com