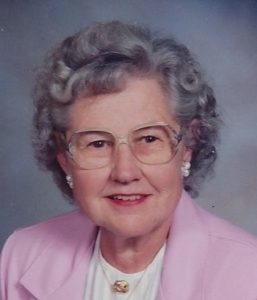 Mary E. Ogden, age 94 of Cuba, passed away at 9:42 a.m. on Wednesday, May 5 at the Clayberg Fulton County Nursing Center in Cuba. She was born on March 24, 1937 in Woodland Township, Fulton County, the daughter of Harry and Leah (Mathias) Grove. She married DeVere Ogden on December 28, 1947 in Astoria. He preceded her in death on October 24, 1988. Mary was also preceded in death by her sister Edna Garlisch. She is survived by her son Kenneth Ogden of Cuba, three daughters; Nancy (and Kevin) Roberts of Bryant, Patty (and Gary) Merrill of Canton, and Brenda (and Chris) VanAllman of Chicago, and five grandchildren; Aimee Roberts, Jennifer (and Isaac) Teel, Kaitlin Roberts, Jessica Merrill, and Paul VanAllman. Mary worked as a secretary for Astoria High School following her graduation from there. She also worked for Lutheran Social Services in home health care. Mainly, she was a farm wife, helping her husband on the family farm. She was a member of the Providence Church in rural Lewistown, where she was a member of the Friendship Club. Services will be held at 11:00 a.m. on Monday, May 10th at Shawgo Memorial Home in Astoria. Pastor David Meader will officiate. Visitation will be held one hour prior to the services at the funeral home. Memorials may be made to the Clayberg Fulton County Nursing Center in Cuba. Interment will be in the Astoria Cemetery.