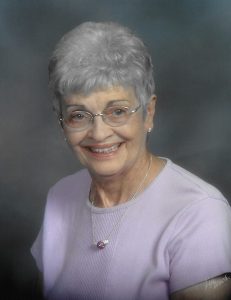 Patsy J. Smith, 89, of Lewistown, passed away at 3:09 Monday May 3 at Graham Hospital. She was born November 18, 1931 at Beardstown, the daughter of John and Nellie (Scherrer) Smith. She married Lucien J. “Buck” Smith on August 23, 1952 at Rushville. He preceded her in death on December 22, 2005. She was also preceded in death by her parents, one son, Jeff Smith, one daughter, Debra Smith, and two brothers, Charles and Jack Smith. Survivors include one son, Jerry (Debbie) Smith of Lewistown, one daughter, Cindy Hunkeapillar of Lewistown, five grandchildren, Jack Hunkeapillar, Jared Smith, Heath Smith, Brandy Luker, and Amanda Scrogum, nine great grandchildren, Trinity, Laila, Caroline, Ariana, Dalton, Willow, Penelope, Layne, and Finnley, and one sister, Margaret “Peg” Spencer of Astoria. Patsy had worked as a telephone operator, and had also been a waitress at the former Bavery’s Restaurant, and the former Harvest House in Lewistown. She was a member of the First Presbyterian Church of Lewistown. She enjoyed crocheting, crafts, sewing, and puzzles. A graveside service will be held at 11:00 a.m. Friday May 7 at Oak Hill Cemetery in Lewistown with Pastor Penny Frame officiating. There will be  no visitation. Memorial contributions may be made to the Fulton County Humane Society. Condolences may be made at henrylange.com