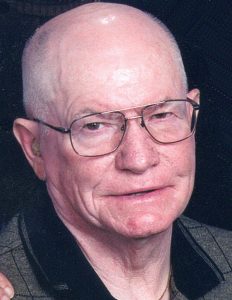 Harold Thomas Williams, 85, of Easton passed away on April 26, at Copper Creek Cottages in Lincoln. He was born on July 26, 1935 in Glasgow, Kentucky, to Frank and Nellie (Oakes) Williams. On October 21, 1955, in Easton, he married Dorena Steinkruger who survives. Harold is also survived by 2 children: Cathy (Ed) Tracy of Anchorage, Alaska, and Joe (Patty) Williams of Pleasant Plains, and son-in-law Gerald Kreiling of Green Valley. He had 5 grandchildren: Jason, Matt, Jenny, Cassie and Jeremy, 6 great-grandchildren: Tarlie Fitzsanko, Beckett Kreiling, Landry Kreiling, Hudson Kreiling, Nory Walker and Wells Walker. He is also survived by sister-in-law Dorothy Williams. He was preceded in death by his parents; son, Jeff Williams; daughter, Teri Kreiling; and siblings, Edyth Williams and Ted Williams. Harold was a graduate of Easton High School in 1954 and went on to work for 7-UP in sales and transportation for over 30 years. From his green uniform pants that he wore for his job, he was given the nickname of “Mr. Green Jeans” by many customers on his route. He was a longtime volunteer for the Easton Fire Department and loved to travel. Travel included trips to Europe and camping throughout the US and Canada. After retirement, he and his wife purchased a motorhome and traveled extensively through North America including driving the Alaskan Highway. Cremation rites have been accorded, and a Celebration of Life will be held on Saturday, May 1, at 11:00 a.m. at the Easton Firehouse in Easton. Memorials may be made to the Easton United Methodist Church or to the Easton Fire Department. Online condolences may be left at www.hurleyfh.com. Hurley Funeral Home in Mason City is in charge of the arrangements.