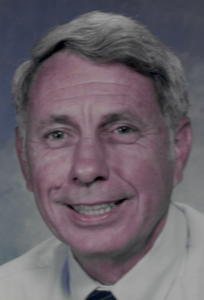 Kenneth (Kayo) V. Mullen, 86, of St. Joseph, a former Havana resident, died on April 9 at his home. Ken was born in Tabor City, North Carolina in 1934. He was preceded in death by his parents, Vincent and Ruth Mullen of Havana and by his wife of 63 years, Miriam (Mim) Mullen, also previously of Havana. He is survived by his two sons, Scott Mullen of St. Joseph; and Kip Mullen (Christina Braun) of Prescott, Arizona; three daughters, Jody (Jerry) Piro, of Miami, Florida; Laurie(Mathew Stuve) Mullen and her husband, of Muncie, Indiana, and Kerry (Ed Risch) Mullen of Chicago; seven grandchildren, Patrick Mullen, Kyle (Melissa) Piro, Taylor (Gavin) Kennedy, Laura Piro, Jordan (Kalalau) Cantrell, and Jim and Dan Risch (late); and five great-grandsons, Kip, Maddox, Dylan, Harrison and Levi; his brother Regis (Patti) Mullen of Dallas, Texas; and his two nephews, Shane (Danielle) Mullen, and Jason Mullen of Dallas Texas; and his great nephew, Knox, and great-niece, Kennedy. Ken graduated from Havana Community High School in 1952 where he was the varsity quarterback, and from the University of Illinois in 1956 where he studied education and was a member of Sigma Pi. As a life-long learner, he continued his post-baccalaureate studies with courses at Western Illinois University and the University of Illinois. Ken and his wife, Miriam, were frequent attendees of various educational lectures at Parkland College and the University of Illinois. His first teaching position was at Astoria High School, teaching biology and civics and serving as head basketball coach. In 1963-1964, he taught biology and civics at Ogden High School where he was also head baseball, cross country, basketball, and track coach. His teams won conference titles in all sports both years. In 1964, Ken accepted a position at Rantoul Township High School. He taught physical science, biology, and earth sciences. Named head football coach in 1970, his teams won three conference championships under his leadership. In 1975, he retired from coaching, but continued to teach until 1990 when he retired after 34 years of teaching. The love of his life, Miriam, was a friend since childhood. They attended Havana High School and the University of Illinois together before marrying. They loved nature and travelled and hiked trails throughout the United States after retirement, and also locally at Homer Lake. Ken loved to garden, exercise, read science books, play cards, and was a loyal Illini and Cardinals fan. He inspired his children to value education and learning, enjoy being physically fit, and embrace wellness. A constant companion with his wife, they both enjoyed their family’s company. A private family memorial will be held at Lux Memorial Chapel in Rantoul. Donations in his remembrance may be made to the American Cancer Society.