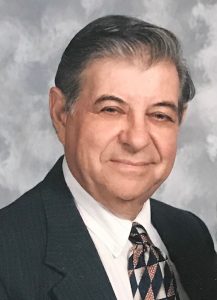 Gilbert Francis Silva, 93, of Havana, Illinois passed away on Saturday April 3. Gilbert was born on March 11th, 1928 to Portuguese immigrants, Gil and Bertha Silva in Plymouth, Massachusetts. Gilbert was raised with his 5 siblings in Plymouth. It was during his youth that he developed his love for the arts. His first instrument was the harmonica. He started piano lessons after his brother Walter had no interest in them. Unknown to many, he played oboe as his primary instrument in elementary school. Gilbert graduated from Plymouth High School in June 1946. In high school, he worked at the Cordage Rope factory in Plymouth, Massachusetts where his father had worked for many years. After high school, he joined the United States Army where started as a paratrooper in WWII then as an acting sergeant and small weapons specialist during the occupation of Japan. After his honorable discharge from the Army, Gil attended and graduated from Boston University with a bachelor’s degree in music as a concert pianist in 1952. During his college years, he was elected into the Honorary Music Society, Fantasia Club. He also participated in summer theater, jobs with a performing music trio, and taught fencing at a summer camp where he shared many of his talents, humor, and overall work ethic. After the Army, he met his wife and love of his life, Phyllis Schneider of Middleboro, Massachusetts at the seaside of Plymouth, Mass. There was reluctance from Phyllis at first, but soon she saw the diamond of a person underneath. After a deeply devoted courtship, they were married on August 31, 1952. Here the Silva Family in Illinois adventure began! Gil and Phyllis had their honeymoon on the way to Gil’s first teaching job in Golconda. In Golconda, Gil and Phyllis welcomed their first son, Daren Francis in 1953. In 1954-55, they moved to Kempton and welcomed their second son Timothy Gilbert in September 1955. To help provide for his family not only was he teaching in Kempton, he worked on a farm transporting chicken eggs to a distributor. In 1956,Gil’s family moved to Havana where Gil resided until his death. In Havana, he served as music director of all types of music programs, choral and band at the different school levels. Not only was the music program expanding under his tutelage, but his family was too. In 1958, Brian Paul followed by Mark Christian, in 1960, were welcomed into the family. In a final try in 1965, a girl arrived, Crystal Marie. Gil dedicated 33 years of teaching that involved award winning choral groups, marching band, concert band programs, and jazz/studio bands. He expanded the programs and student participation to include musicals (i.e. Sound of Music, Wizard of Oz, Lil’Abner), madrigals, private lessons, and various small performing groups while getting his Master of Education at the University of Illinois in 1959. As a true lover of music and the importance of music education, he would repair instruments for any student that could not afford the cost or to lose any time for their music development. His love of music was infectious and provided so many souls a way of expressing themselves including all his children. After his retirement in 1989, he could not stop his love of music or education and became a board member of the Havana School district, directed the Muddy River Band, and became a piano technician. Besides the love of music, Gil had many more talents and hobbies that he shared with his family and the community. Gil and Phyllis took an old broken-down home and remodeled it into a comfortable family home. He was a handyman in all areas and had a love of woodworking from his father. He shared his hobbies of hunting, making beer, root beer and wine (from his own grapes), model airplanes, making toodlings during holidays, painting and playing music with his family. Many of the traditions carry on with his children, grandchildren, and great-children! Gil was an active member of St Patrick’s Catholic Church and a long-term member of Havana Rotary Club where he served in various roles. Gil was a loving husband, father, grandfather, great grandfather, uncle, and brother to a large extended family who was blessed by his wisdom, humor, and talents. He will be sorely missed by family, friends, and community. Gil was preceded in death by his parents Gil and Bertha, his wife Phyllis, his siblings Mary McKenzie, and Walter J. Silva. Gil is survived by his siblings, Lorraine Souza, Diane (Tom) Condon, and Dennis (Terry) Silva, his children, Daren (Becky) Silva of Havana; Tim (Mary) Silva of Fort Madison, Iowa; Brian Silva of Havana; Mark (Gail) Silva of New Berlin; and Crystal (Mike) Ellman of Naperville, 19 grandchildren, and 10 great grandchildren. Rosary will be held on Thursday, April 8at 4:00 p.m. at St. Patrick’s Catholic Church in Havana, with a visitation following until 6:00 p.m. Funeral services will be held on Friday, April 9 at St. Patrick’s Catholic Church in Havana at 11:00 a.m., with an hour of visitation to be held one hour prior to the service from 10:00 a.m. to 11:00 a.m. Fr. David Whiteside will officiate. Burial will follow the service at Laurel Hill Cemetery in Havana. Memorial donations may be made in Gil’s name to St. Patrick’s Catholic Church or the Alzheimer’s Association. Online condolences can be left for his family at www.hurleyfh.com. Hurley Funeral Home in Havana is in charge of arrangements.