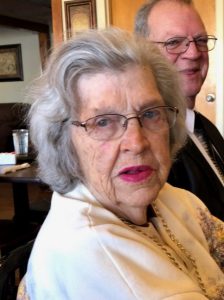 Nelda L. Hays, 93, of Havana passed away on Tuesday, February 16 at 7:40 a.m. at Mason District Hospital in Havana. She was born on July 26, 1927 in Bluff City to Fred and Mildred (Horner) Bricker. She married Robert Glenn Hays in Havana on August 12, 1950. He preceded her in death on March 25, 1977. Mrs. Hays is survived by her brother, Ronald Bricker of Havana, niece, Rhonda (Jimmy) Neely of Havana, and several other nieces and nephews. She was preceded in death by her parents, husband, five brothers, and two sisters. Mrs. Hays worked as a cook at New Central for 20 years. Funeral services will be held on Saturday, February 20 at Hurley Funeral Home in Havana at 10:30 a.m. Burial will follow the service at Laurel Hill Cemetery in Havana. Memorial donations may be made in Mrs. Hays name to Mason District Hospital or St. Jude Children’s Hospital. Online condolences can be left for her family at www.hurleyfh.com. Hurley Funeral Home in Havana is in charge of arrangements.