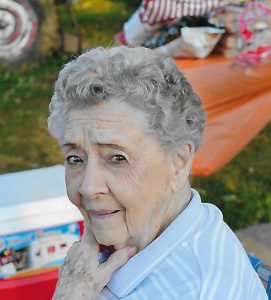 Juanita M. Stufflebeam, 92, of Lewistown, passed away at 4:33 a.m. Sunday February 7 at Mason District Hospital. She was born August 25, 1928 at Canton, the daughter of Isaac and Opal (Wilcoxen) Harn. She was raised by Jesse Wilcoxen. She married Delbert Strode in 1946. She later married Verne Stufflebeam on June 10, 1972 at Lewistown. He died June 12, 1988. She was also preceded in death by her parents, one brother, and five sisters. Survivors include one daughter, Joyce (Terry) Hurley of Lewistown, three grandchildren, Marla (Tony) Sheets of Lewistown, Marcy Boyer of Burlington, IA; and John (Kristina) Hurley of Lewistown, six great grandchildren, five great great grandchildren, two brothers, Lewis Harn of Lewistown, and George (Thelma) Harn of Lewistown, and one sister, Jane Boyd of Lewistown. Juanita was a homemaker and had also worked at Atwood in Havana. She was a member of the Lewistown VFW Post 5001 Auxiliary, and loved country music. A graveside service will be held at 2:00 p.m. Wednesday February 10 at Oak Hill Cemetery in Lewistown. There will be no visitation. Memorial contributions may be made to Lewistown VFW Post 5001 Auxiliary or any charity of the donor’s choice. Condolences may be made at henrylange.com