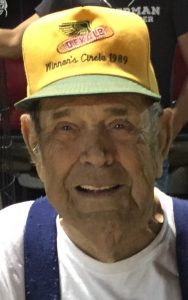 Kenneth D. Brooks, 83, of rural Smithfield passed away at 3:35 a.m. Friday February 5, at his home. He was born July 29, 1937 in Marietta, and he was the son of Dale W. and Helen L. (Wright) Brooks. He married Marilyn J. Ford on August 11, 1956 in Smithfield. She survives along with three sons, Craig (Kathy) Brooks of Smithfield, David (Christina) Brooks of Cuba, and Darin (Cambria) Brooks of Cuba, seven grandchildren, seven grandchildren, Mary, Andy, Tucker, Taylor, Tanner, Carlee, and Collin, two great grandchildren, Berlin, and Jasper, and one brother, Bill (Mary Jane) Brooks of Cuba. He was preceded in death by his parents, one infant son, and one sister, Sharon Silvey. Kenny was a life-long farmer. He served many years on the Fulton County Board and over 30 years on the Fulton County Housing Authority where he also served as board chairman. Kenny had a passion for antique tractor pulling. He also rarely missed an opportunity to snowmobile with family and friends in northern Wisconsin and the Upper Peninsula. Cremation will be accorded. A private family service will be held Monday at Henry-Lange Memorial Home in Lewistown with Reverend Larry Wright officiating. There will be no visitation. A celebration of life will be held at a later date. Memorial contributions may be made to Cass-Putman Rescue Squad, Smithfield Fire Department or Bald Bluff Tractor Pulling Association. To send online condolences visit henrylange.com.