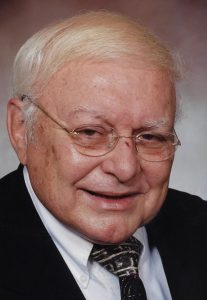 George O. Baughman, 82 of Lewistown, passed away at 9:10 a.m. on Wednesday, January 20 at Graham Hospital. He was born on July 14, 1938 in Fulton County to Herbert and Neva (Smith) Baughman. George was preceded in death by his parents and several aunts and uncles. Surviving is his cousin and caregiver, Kathryn (Dennis) Turner of Lewistown and several other cousins. George earned a bachelor of science degree in 1960, and a master of science degree in 1967. He went on to teach business education and computer science at Lewistown High School for 33 years. George also taught accounting and computer science courses at Spoon River College in the evenings, and took additional coursework at Western and John Wood Community College. He also worked at an accounting firm and owns and formerly managed a farm. Over the years, George has served on numerous local and state boards including the Lewistown Masonic Lodge #104 A.M. & F.M., Western Illinois Business Teachers Association, the Illinois Education Association, 40-year member of the Secretary of State’s Antique Auto Show judging team,member of the Mohammed Shriners A.A.O.N.M.S of Peoria, member of Lewistown Historical Society, served as a deacon at the Lewistown Presbyterian Church, and later on in his life he attended Mt. Pleasant United Methodist church. George also served on the alumni corporation board of Gamma Kappa Chapter where he was treasurer for three of his four undergraduate years. He was an avid supporter of WIU over the years, as well as his fraternity, Delta Sigma Phi. As an alumnus, he served as a member of the advisory board for the fraternity from 1960-66 and from 1997 until present time. George was named Greek Adviser of the Year in 2000. He was also a member of the WIU Alumni Council and Western’s Library Leadership Board, and won the 2015 WIU Alumni Achievement Award. George established the George Baughman Scholarship for the College of Business and Technology in 2008. He supported the Malpass Library and Alumni Programs. George continued to support athletics, libraries, preforming arts society and scholarships annually. George has not missed a WIU Homecoming except during WWII and enjoyed driving the Homecoming royalty in the annual parade in one of his antique cars and did so for 37 years of parades. He has attended over 100 alumni events and in 2018 he was the Homecoming Parade Grand Marshal. George was a member of the Antique Auto Club of America and served as Master Judge and has won awards at both the state and national levels for best antique car. He had such a passion for antique cars and traveling and that lead him to travel throughout the United States participating in and judging antique car shows. George has traveled to 48 states and 19 countries. Graveside services with Masonic rites will be held at 2:00 p.m. on Wednesday, January 27 at Oak Hill Cemetery in Lewistown. Pastor Kathy Barrett will officiate. Memorials can be made to Donor’s Choice. Sedgwick Funeral Homes & Crematory in Canton is in charge of arrangements. To make online condolences you may go to www.sedgwickfuneralhomes.com