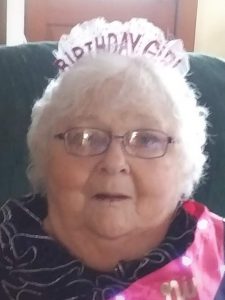 Linda M. Danner, 84, of Astoria passed away at 10:24 am on Wednesday, January 13 at her home. She was born on January 19, 1936 in Salt Creek the daughter of Theodore and Rhonda (Jockisch) Hamblin. Linda married Jack Danner on February 6, 1953 in Astoria. Jack preceded Linda in death on November 9, 2017. Also preceding her is her daughter, Vickie Spires, 4 brothers, Richard, Thomas, David, and Gerald Hamblin, and 2 sisters, Rosemary Shirley and Betty Krohe. Survivors include her 3 daughters, Debra Bailey of Havana, Anita (and Steve) Burgett of Havana and Patty Kolves of Astoria, 3 grandchildren, Joseph (and Jennifer) Bailey, Gabrielle (and Trevor) Palmer, and Zachary (and Evie) Kolves, and 5 step-grandchildren, DeRoma Spires, Brandon Spires, Odette Spires, Trista Morris and Holly Kolves. Linda was a telephone operator in Astoria. She was also a cook at Jeanies Kountry Kitchen in Astoria, Fireside Lanes Bowling Alley in Lewistown, Arrowhead Café at Arrowhead Junction, and Hamblin’s in Summum. Linda, along with her husband Jack, raised and sold German Shepards for 43 years. She enjoyed doing needlepoint. She attended the Astoria Christian Church. Cremation rites have been accorded. A memorial service will be held at 7 p.m. on Tuesday, January 19 at Shawgo Memorial Home in Astoria. Pastor Gary Sheets and Pastor Matthew Thiner will be officiating. A visitation will be held one hour prior to the service on Tuesday. Memorials may be made to the Astoria Rescue Squad.