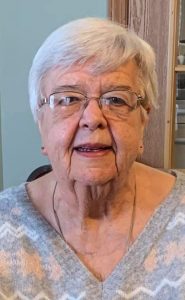 Frances J. Fisher, 83, of Canton, passed away at 6:38 p.m. on Tuesday, December 29, at Graham Hospital in Canton. She was born on February 16, 1937 in Canton to John and Lenora (Grigsby) Thompson. She married Paul R. Fisher on September 23, 1956 at the First Baptist Church in Canton. He preceded her in death in 1993. She is also preceded in death by her parents; one son, Brad Fisher; and one sister, Terri Jackson. Frances is survived by four sons, Barry (Laura) Fisher of Ellisville, Brian (JoEllen) Fisher of Mendota, Bruce (Sherry) Fisher of Canton, and Brent (Laura) Fisher of Silvis; nine grandchildren, Bill Fisher, Robin Fisher, Jeremy Fisher, Nicole (Michael) Zasada, Patrick (Brianna) Fisher, Crystal (Adam) Hodges, David Fisher, Erica Fisher, and Carl (Lauren) Fisher; three great-grandchildren, Jocelyn Zasada, Briston Fisher, and Thor Fisher; two brothers, Jim (Nanci) Thompson, and Jerry (Marilyn) Thompson; one sister, Mary Jane (Larry) Perry; and one brother-in-law, Bill Jackson. Frances was a farm wife for over 30 years. She worked at Prairie City Rehab and Health in Prairie City, and Farmington Country Manor Nursing Home and Rehab in Farmington. She also worked as a parent educator for Bridgeway in Canton. Frances was a member of the First Baptist Church in Canton. She attended the Fairview Reformed Church in Fairview. She was a 4-H leader for 41 years and was inducted into the Illinois 4-H Hall of Fame in 2007. Graveside service will be held at 10:00 a.m. on Monday, January 4 at White Chapel Memory Gardens in Canton. Pastor Jeff Lampen will officiate. A live stream link will be provided on our website below the obituary and our Facebook page. Sedgwick Funeral Homes & Crematory in Canton is in charge of arrangements. Memorials may be made to the 4-H in Fulton County. To make online condolences you may go to www.sedgwickfuneralhomes.com